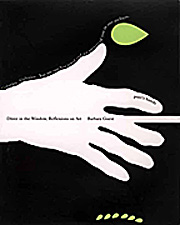 Dürer in the Window contains the poet Barbara Guest's writings on art from the '50s to the present; designed by the artist Richard Tuttle, the book (with its multiple typefaces and idiosyncratic layouts) is also a beautiful object. It opens with a marvelous essay on Jean Arp that begins, "I like to be in the presence of Arp, the gentle solace of his anarchy." The essay's type shifts from short lines to long stretches of sentences, and turns into floating paragraph discussions of Arp's ideas and his poetry. Written in 2000, the Arp essay has a timeless air as opposed to the pages that follow it, which provide neatly dated paragraph reviews that Guest wrote as a working critic for Art News from 1952 through 1954. Her writing here is at once brisk, forceful, and succinct. In between the double-page spreads of reviews are reproductions (though not very good ones, unfortunately) of the art works discussed. Guest's collaborations and longer individual essays follow, and then finally, best of all, we are given a small selection of poems where art itself becomes the poet's muse.

Dürer in the Window is the second book of Guest's prose to appear this year, following Forces of Imagination (Kelsey Street Press), a collection of her writings on writing. It is no accident that the essay, "The Shadow of Surrealism" appears in both books; Guest is unable to separate the experience of writing about art from the experience of being a writer in the art world. "The Shadow of Surrealism" describes Guest's experience as a poet among artists in a time when there was no "recognized separation between the arts," though the gap between poets and artists was beginning to widen: "Money," Guest writes, "rolls into the pockets of painters with a frequency that stuns poets." During the '50s she saw how artists went on to become accepted and iconic figures, part of mainstream American culture, in ways unimaginable for poets. But Guest's affinity with surrealism goes deeper. Witness her deep sympathy with Jean Arp (who was also a writer), her collaborations with Joe Brainard, and her appreciation of Louise Bourgeois—who, Guest writes, "works her way through the influence of surrealism. . . using a surrealism that exists in terms of her own identity." Bourgeois is one of the first artists to reintroduce the notion of performance and like her forebears "uses sexual imagery." Guest rejoices in Bourgeois's excesses—as perhaps something not open to poets; certainly it is an approach she herself never uses. Ironically, Guest's appreciation of Mondrian is a low-key description of her encountering a Mondrian painting back in the '50s and being unable to respond to his abstract aesthetic. And yet, Guest's own poetical practice seems much more in keeping with Mondrian's stripped down iconic abstractions than with Bourgeois's tumultuously angry, passionate lurking spiders.

Dürer in the Window contains both journeyman art criticism and essays of dazzling writing and insight. Guest's writing on Frankenthaler and Goodnough are serviceable, but her appreciation of Richard Tuttle, written in 2000, is gorgeous. Titled "The Color Green in the Art Work of Richard Tuttle," it is at once a meditation on the uses of green in painting and of Tuttle's technique. "He likes to surprise the viewer. The surprise is a subsidiary of his technique," she observes, which strikes this reader as equally true of Guest's own poetry. The essay concludes, "Color remains this artist's alphabet."

Interspersed between the essays are two Guest poems specifically written in conjunction with artworks, specifically a sculpture by Tony Smith and a lithograph by Grace Hartigan. "Egypt," the Smith poem, is a witty, Steinian mediation on the physical stance of the sculpture. The Hartigan poem, on the other hand, "The Hero Leaves His Ship," is full of unexpected metaphors, e.g. "The sea has its own strong wrists." The poem manages to encapsulate a change, a life shift, without literally describing it.

Modestly grouped at the very end are eight Guest poems of varying lengths, all of which are reproduced on plain white paper (i.e. without the backgrounds of unexpected pale yellow rocks and green strips or delicately colored page-long stripes that appeared in the prose pieces). The longest here is the five-page poem "The Nude," beginning "Studios are stations of reminiscence." Its two line stanzas are at once about art and life, the painter's job in the studio and experience with the body ("The painter desires the image he has selected / to be clothed in the absolute silk of his touch"). What one confronts in front of the blank canvas—or for that matter, the blank page—is matter for lyrical meditation. Art, Guest discovers, is a contradiction of time, a thing of ecstasy, a summoning of the supernatural, a celebration of Leda and the Swan on the one hand and of "local ornamental mundanity" on the other.

Barbara Guest is a lyrical poet par excellence. Sharp and perceptive and never sentimental, her tribute to the architect Frederick Kiesler and her meditation on a painting by Haydn Stubbing are inspiring in their own right. They stand on their own without the reader needing to know what the art work in question looks like. This is a book for anyone interested in melding the verbal with the visual. It is a book for lovers of art, and for readers of poetry. The uniqueness of Barbara Guest's gifts and the originality of her vision are all over the pages of Dürer in the Window.