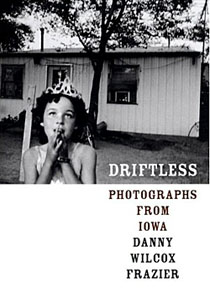 Danny Wilcox Frazier’s Driftless: Photographs from Iowa is the 2006 winner of Duke University’s Center for Documentary Photography/Honickman First Book Prize. Frazier’s images endeavor to shed light on the people and places that mainstream media neglects to illustrate. As rural economies fail, people and resources are migrating to the coasts and cities, altering rural America. Taken by an insider who has lived in Iowa his entire life, Frazier’s photographs show us these abandoned places and describe the lives of those people who stay behind. His approach is completely different than this spring’s news stories about Iowa’ spring flooding, which presumed that the impacts, although awful, were limited to the present; nowhere on national media were reports of the long lasting effects of the flooding on Iowa’s already unstable rural economy.

The instability of Iowa’s economy was the primary focus of Frazier’s Artist’s Talk at Duke University on 8 November 2007, but he also pondered whether or not Iowa’s rural lifestyle will ever be viable again. At the end of the talk Frazier stated, ”The reality is that farm work is so mechanized now that maybe we just don’t need that many people living in rural areas, and maybe it’s just a pipe dream I need to give up on.”

Frazier has statistics to back his ruminations. According to POYi.org more than 60% of college-educated Iowan’s leave their rural communities. Frazier has explained in various interviews that they are seeking intellectual careers in cities like Minneapolis, Chicago, even as far as New York, leaving half of Iowa’s counties with a decreasing, less educated population: 79% of the population in Iowa has a high school diploma or less (quickfacts.census.gov). Meanwhile, other government census statistics list the (legal) Latino immigrant population as having increased 153% between the last two censuses.

Frazier, a photojournalist by trade, states in his Artist’s Talk that his work is not partisan, but his words are clearly left-leaning, as when he cites facts of immigration’s effect upon Iowa rural economics, or includes captions in his book such as “Migrant workers enduring long hours bent over while harvesting watermelon, Conesville, 2003,” to illustrate their roles in the economy. Another photograph, “Bull rider and farmhand Rusty Caudle, North Liberty, 2003,” shows Rusty’s sinewy body exhibiting the extreme physical labor required to maintain a farm, as if making the point that these immigrants are accepting bone-breaking work that few others want to take; yet for those Iowans who remain, it is difficult to survive when immigrants accept work at lower rates. Often enough when workers attempt to organize, employers play on fears of Federal officers swarming in to keep unions out. This is only a small piece of the vicious economic cycle that endangers rural culture in Iowa.

It was a discussion on All Things Considered that inspired Frazier to photograph evidence of another social issue, manifested by the Stutzman family—an Amish family with several children who work up to 14-hour days during harvest. The radio story covered a debate over international child labor laws that would make it illegal for children under the age of eighteen to operate heavy machinery. In numerous interviews, Frazier related his going to the farm and finding a six-year-old who had already been driving a skid-loader for a year. Many rural families rely upon their numerous children in order to provide the labor to survive, yet outsiders may wonder if a child operating such equipment is the equivalent of child-endangerment.

Frazier produced this book’s body of work over a period of four years with a single Leica camera, one lens, and a bag of TriX film, resulting in a few thousand photos, yet he selected only eighty images for the final publication. As loaded as the images are with the political debates of the contemporary rural community, only about 80% of them relate to these debates. The images are high-contrast black-and-white gritty scenes that recall the feel of Sin City (Frazier stated in his Artist Talk that “the color images didn’t have the color of life”), but with a subtle influence from the works of Walker Evans and Robert Frank. Frazier has repeatedly disclosed the influence of Frank’s work on his own, making it possibly problematic that Frank was the judge of the Honickman Prize given to Frasier.

That question aside, Frank is considered the pioneer of the snapshot effect, and Frazier’s work is very from-the-hip, as some images are completely out of focus. This distorting effect works for images such as “Harry and Helen Phelps, Sutliff, 2005,” which conveys the disorientation of Helen’s advanced Alzheimer’s, and “Plastic farm scene, Fort dodge, 2003,” which possesses an ethereal fairy-tale feeling, while images like “Cowboy playing pool at a bar, Ottumwa, 2004” and “Outside the farmhouse, Johnson County, 2006” reveal nothing in their blurriness. While Walker Evans’ Farm Security Administration works are clearly reverberated in images such as “Sale Barn Café, Kalona, 2005” and “Harvest on the Miller family farm, Kalona, 2005,” with their depictions of hard working Americans trying to scratch out a living and a life amidst the difficulties of agriculture, Frazier’s photographs are less hopeful for the future when the cynicism of the dehumanizing of farming begins to enter them.

A confluence of these inspirations with the luck of correct focus occurs in the image “Patriotism, Des Moines, 2006,” where, while driving, Frazier’s chance sighting of a veteran with a full-size American flag attached to his wheel chair is caught with a near-lying camera without his even looking through the viewfinder. The image captures the Iowan tradition of military service even in today’s war, yet the darkness of the image and near-scowls on all but one face give a negative tone to that patriotism.

As much as Frazier declares his work to be giving a voice to the rural communities he lives among, he can still be seen as the Iowan who left for the big city. He too left the family trade for an intellectual career, even if still residing in Iowa City. At his Artist’s Talk, he declared, “I just for whatever reason did not feel comfortable in my own skin or the place I was from. I, no different from those who have fled the rural areas in the Midwest, had a feeling of wanting to escape… It’s still wanderlust just to get out and travel.” Frazier’s journalistic work has sent him all over the world, leaving his family in Iowa as he travels.

When comparing his roots to his place in Iowan society today, one cannot help but question if, by only showing the harsh realities, Frazier is exorcising the realities that made him uncomfortable, in that way allowing him to remain. “Plastic farm scene, Fort Dodge, 2003” is the idealized stereotype of Iowa that Frazier is correct in showing to be false. In its place, however, rather than showing positive images of hardworking people, he paints an image of uneducated, aimless youth that have remained, a dying generation before them, and an overworked minority population growing to support them all.