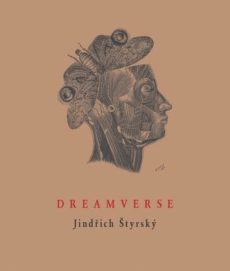 “Where should I flee? . . . My childhood is my country. My dreams are my country.” So wrote Jindrich Štyrský following the invasion and destruction of his native Czechoslovakia by the Nazis. In encapsulating his situation, he also encapsulated his art. Dreamverse isn’t so much the atlas of Štyrský’s inner world as a set of picture postcards—often scandalous, just as often intoxicating—sent from this land of imagination. The most complete collection of Štyrský’s writing in English, gathering dream accounts, poetry, and essays, it follows on Štyrský’s essential work Emilie Comes To Me in a Dream, an artists’ book comprising prose poetry and photomontage that was published as part of Štyrský’s series of erotic works, Edition 69.

In 1925, Štyrský and the painter Toyen arrived in Paris. There they created art, devised Artificialism (manifestoes of which are included in Dreamverse), and Štyrský began recording his dreams. They didn’t associate with the Parisian Surrealists, and on their return to Prague three years later they rejoined Karel Teige’s association of avant-garde artists, Devetsil. There Štyrský crafted a series of prints for the 1929 Czech translation of Lautréamont’s Chants de Maldoror, and the following year he launched the Erotic Revue. It wasn’t until 1934 that they joined in the formation of the Surrealist Group of Czechoslovakia, with the poet Viteszlav Nezval taking the helm—an event solidified by a visit from André Breton, Jacqueline Lamba, and Paul Éluard in 1935. Four years later Nezval bowed to pressure from Moscow and attempted to dissolve the group, yet Štyrský, Toyen, Teige, and others kept on, perpetuating a Surrealist movement in Prague that has continued to the present day.

Of the three sections that make up this collection, Dreams is the longest and most remarkable, though this is not to slight the poetry or the many important essays gathered here. When Štyrský died of a congenital heart condition in 1942, the manuscript and layout he’d prepared for Dreams sat unpublished; it wouldn’t appear in Czechoslovakia until 1970. Wisely, Twisted Spoon has retained Štyrský’s layout, presenting Jed Slast’s sharp translations interspersed among drawings, collages, and paintings that develop and resituate the objects of his dreams. The prologue opens up the heart of his work:

As a young child I saw in the color supplement of a magazine the image of a woman’s head, exquisite with golden hair, whose pale hue will always suggest azure to me. Her lips, red with lipstick, looked like a moist chasm, though silent, slightly parted, and mute. Eyes of violet—in them pride, sin, and weakness—blazed in a pallid face. The head was perverse, yet full of compassion, damned, yet full of kindness. It was the head of Medusa, the whole of it in a pool of blood. . . . The head was a perfect fit on my sister. . . . Thus I instinctively created my CHIMERA, my PHANTOM OBJECT, on which I am fixated and to which I dedicate this work.

On the facing page is Portrait of My Sister Marie (1941), a charcoal drawing in which a bust of a young woman emerges faintly from the background, only her dark eyes vivid within the outline of a face, the whole image cracked and split like an old poster peeling off a city wall. Here is the older step-sister that Štyrský lost at the age of six to the heart condition from which he would later suffer.

Dreams borrows its epigraph from the opening sentence of Gérard de Nerval’s Aurelia (“Our dreams are a second life”) and “chimera” also derives from Nerval, for whom love offered itself in the chimeric figures of women compounded of dreams and memory. As for the “phantom object,” it is drawn from André Breton’s Communicating Vessels, and signifies a dream object with no waking world counterpart, like the “envelope-silence” sprouting eyelashes and a handle that Breton analyzes. The power of poetic suggestion in such objects derives from their imaginary uses—how they might be employed, on what occasions, and by whom.

Eyes obsessed Štyrský. Throughout Dreams they float against backgrounds suggesting stucco, greenery, pubic hair, fog, mica sheet, scales, and more. In Emilie Comes To Me in a Dream, Štyrský writes, “I am tormented by the sighs of women, by eyes contorted in convulsions of orgasm.” Here such eyes find their complement in the “Dream of Books” in which Štyrský relates searching for a book for Toyen among the bouquinistes on the Seine; he buys several 18th-century works with engravings of tropical plants, then at Notre Dame he finds an old, leather-bound volume at another bookseller:

When I look at it, I see a crumpled ear on the front cover, and when I take the book from its row, the ear straightens out. I steal a glance at the bookseller sitting behind me. In front of him is a stool with a laver of water. He removes one eared book after another from the shelves, dusting off the ears and then giving them a good washing, after which he dries them with a clean towel.— — — — The ears flower — — —

In most of these dream accounts there’s no need to hunt for sexual subtexts; it’s what Štyrský does with his strongly sexualized images that matters. Emilie Comes to Me in a Dream is a playhouse of pornographic imagery and as he says here of one of his Emilie dreams: “I make love like a child.” Like a child in that sex is mysterious, powerful, and full of secrets that undermine the reign of adult control. But more than that, dreams allow us to see and to speak with the dead, so we cannot be surprised that Štyrský follows this intercourse to erotic ends. The imaginative world of childhood is also the birthplace of sexuality, and it is this world which Štyrský so deftly explores in Dreamverse.