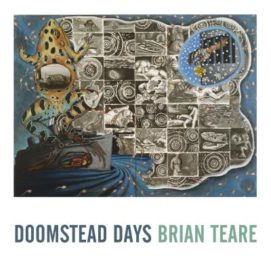 “I touch through rhythm, / notebook open as I walk, / strike inflecting script // with wobble & slant,” writes Brain Teare in his poem “Toxics Release Inventory (Essay on Man),” describing his writing-while-walking composition method. It’s hard not to think of Henry David Thoreau while reading the eight long poems that make up Doomstead Days. Like Thoreau, Teare possesses a sharp eye for the environment, whether it’s the land, water, or wildlife. He’s equally gifted with his use of language and poetic structure. His poems offer an honest (which is to say bleak) account of what we’re doing to our planet, while somehow never resorting to despair.

Wherever Teare wanders, whether California, Pennsylvania, or Vermont, he finds evidence of devastation. In “Clear Water Renga,” he witnesses a Western grebe, coated in oil from a tanker which, on November 7, 2007, unleashed “fifty eight / thousand gallons of bunker // fuel oil.” In the title poem, he notes that even during a drought fracking continues: “millions of gallons // of toxic wastewater // injected into earth // or kept in open ponds // prone & porous.” In “Convince Me You Have a Seed There (Johnson, VT),” he studies red pines and wonders what the wind wafting through a genetically engineered pine might sound like:

& even e. coli
to become

Yes, there really is such a “super” tree. Yet the author somehow remains calm, even enthused, in the face of the anthropocene. In “Olivine, Quartz, Granite, Carnelian,” he notes: “So I walk the way // enthusiasm means / I’m possessed by some god,” and near the end of the poem he uses the oxymoron “laughable enchantment.” Even while he understands the land is “the sort of ruin / that seems livable // until it isn’t,” he doesn’t convey despair.

Perhaps it’s language itself that buoys Teare, as well as the reader. Here’s how he describes a coyote: “on the trail I encounter // for the first time a coyote / exactly the color of July.” His ear for ambient sound is just as vivid:

I can hear, my ear
an eye in dilation :: there
the city’s center

seizes my senses
with noise total as weather ::
gate slam, garbage can,

into conniptions
in the pet shop’s front window

Another element that sustains this book is the intricate structure of each poem. In “Toxics Release Inventory,” for example, the author employs haiku, with three lines of five-seven-five syllables. Each page has six haiku (except for the first page, which has five, to allow space for the poem’s title), and this poem goes on for fifty pages! The tension of tight form and expansive length allows Teare’s poems a depth and range, a sense that the poems can go anywhere and discuss any topic, whether the health of the biosphere or his own body: “my gut // a bloom of fungus, / my blood an arsenic sleeve, / a lead reservoir, // a wet rose loaded / with mercury.” Note how even this toxic inventory feels lyrical.

Teare reminds us over and over in these poems that we are not removed from our world at large. In fact, his descriptions of his body mirror the way he sees the environment. Here he’s receiving care from a “healer’s hands” as he surveys his body: “OKAY I’m awake now // rowdy with trout // psoas relaxed // my body’s a conduit // it roars with water // passing from past // to present through // pipes & riparian // ecotones alike.”

Given the havoc of climate crisis around the world, Doomstead Days is an all too timely book. While its title may invoke a sense of doom, Teare’s poems accurately report what he finds on his walks, and yet at the same time inspire us to act with tenderness. Here is how the book closes, after the author uses the phrase “men with weaponized // genders” for those who believe they can survive any catastrophe in their bunkers:

the world is awake

be careful my dears

it is the gender