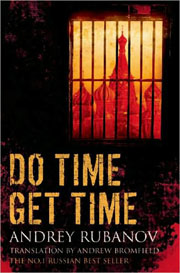 If the buzzword of Soviet thought was party-line materialism, then the crux of the post-Soviet ’90s was its insidious opposite: immaterialism. Things, the once-proud raison d’être of Soviet ideology, disappeared at an alarming rate. Russia, the former economic backbone of a world superpower, was now a fledgling nation, rife with internal unrest and kept on life-support only through a massive influx of international loans.

Instead of mending the pitfalls of a defunct planned economy, Yeltsin-brand capitalism exacerbated the situation, transforming the administrative hierarchies of the communist bureaucracy into an astoundingly unequal distribution of wealth that divided Russia's nouveau riche from its nouveau pauvre. (The leader of the Communist Youth Corps became the owner of an oil field; the party secretary in Siberia became the chairman of a bank, etc.). Mazes of informal exchange—née the Soviet black market—became the near-official modus operandi of the Russian Federation: in order to get a piece of the post-Soviet pie, you not only had to know the butcher, the baker, and the candlestick maker; you had to trust them, bribe them, and make them “business associates” as well.

No one understood this better than Andrei Rubanov. Do Time Get Time, Rubanov's debut novel/semi-autobiography, is a handbook-of-the-revolution for Russia's post-1991 entrepreneurs, and an exemplary piece of fiction from one of the more interesting periods in recent Russian history. Young and provincial, Andrei enters Moscow’s seamy world of underground banking, embezzlement, stolen passports, and forged documents. His naiveté lands him as the fall man in an illegal banking operation; when the tax-man comes, it is Rubanov, not the firm’s operator, who ends up behind bars.

While the crime novel may be a hackneyed trope of Russia's would-be Dostoevskys, Rubanov's approach is unique: no one in the novel is murdered, no object illegally touched. Blue-collar steel is a faux pas, white-collar stealing is trés chic; the corporal is passé, the ephemeral is cutting-edge; hands are outdated, handwriting is la mode. Andrei's wealth is fleeting, passing from rubles to dollars, from dollars to trusts, and from trusts to bankruptcy: a pricy cash counting machine, in his words, is more important than a flashy car. Evanescent cash networks and one-click transactions, rather than noir gangsters or ironclad proletarians, fuel Rubanov's dark vision of a squalid and corrupt Moscow.

Far from a ruthlessly edacious glutton for wealth, however, Rubanov is a darling defalcator, a burgeoning banker who, in trying to make a (dis)honest ruble, has to cut a few commonly-clipped corners —think Russian Bernie Madoff, but likeable. With that in mind, the publication of the novel is—to say the least—timely. Available in English for the first time since its 2006 Russian release, the novel confronts an audience whose sympathy for so-called economic robber barons has been sapped by Ponzi schemes and CEO bonuses. But this is hardly the end of the story. Rubanov spent three years behind bars without once being called to trial, and he is not afraid to flaunt it. At a time when human rights activism is one of the most dangerous jobs in Russia, a sordid portrayal of post-Soviet prisons is an audacious, strident gesture. Like everyone’s favorite Russian crime novel, Do Time Get Time elicits meditations on crime, particularly financial, and its consequent relation to punishment, unfair or not. The connection between the two is vexing, and Rubanov will not let that go.

But Rubanov has more on his mind than highbrow ponderings of the nature of things.

Like the Pelevins, Tolstayas, and Petrushevskayas of his generation, Rubanov is a strikingly complex amalgamation of two warring world-views. His insatiable avarice for wealth collides with a warm nostalgia for a childhood spent in the oneiric “Land of the Soviets.” Adrift somewhere in the interplanetary gap, Rubanov’s narrator meanders between the two celestial bodies, at times touting a semblance of Soviet-era heroism and self-discipline, at others castigating the ancién regime for its antediluvian restrictions on individual economic initiative. In many ways the novel is a literary spreadsheet on which Rubanov measures out the bulls and bears of a nation stuck between capitalism and communism, West and East.

Rubanov’s balancing act, unfortunately, sometimes falls flat, appearing too eager to dissolve the potentially rich ambiguity between the past and the present, and torpidly flattening his narrator with capitalist maxims such as “my clothes are more expensive than yours” or “I want $$$ now now now.” While the prison scenes dominate the girth of the book, they become familiar and tedious; meditations on the meaning of life are more intriguing, but seem forced and disjointed—like Raskolnikov on twitter. If a “New Russian Psyche” exists, Rubanov certainly displays it; if you are looking for a New Russian Prose, this is not the place.