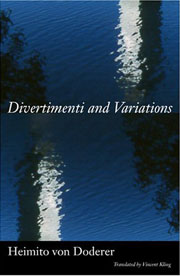 The pivotal event in all of Heimito von Doderer’s “Seven Variations on a Theme” is the opening of a space, e.g., “there suddenly comes into being beneath him an open chasm into which he plunges.” The catalyst that opens the space can be anything: the death of a friend, the loss of one’s possessions through burglary, or the withdrawal of sexual interest. Even biting into a marzipan candy shaped like a pear opens a “chasm” exposing the precariousness of existence. How easily this world could be replaced by something else for which Doderer, at this point in his career, does not yet have a name.

In this early experiment from Divertimenti and Variations, a collection of what translator Vincent Kling describes as “apprentice pieces” written in the 1920s, Doderer has already found the theme that will occupy his major novels several decades later. In The Demons (1956) he calls this theme the creation of a “second reality” (zweite Wirchlichkeit), or, as one of the narrators of The Demons explains, “a hereafter in the here.” For example, Leonhard, a factory worker, is attracted to a woman who works in a bookstore. As a pretext for approaching the woman he purchases a book from her, which turns out to be a Latin grammar. He starts studying Latin, at first idly, then with increasing seriousness, until it becomes his second reality. (In recognition of this fact, Doderer makes the author of the Latin grammar one of the principal characters in the novel.) Similarly, a music student who is unable to sleep before an important audition at one point enters a condition of perfect unity in which she swivels out of bed, picks up her violin, and uses it to create a more beautiful tone than any she has made or heard before; in the chasm that opens beneath her, she generates “a hereafter in the here.” Not just the “Seven Variations” but all of Doderer’s writings are variations on this theme.

Compare Doderer’s treatment of this theme with that of other modernists. For O’Neill, the futile pursuit of the “nowhere” (Long Day’s Journey into Night) or “pipe dream” (The Iceman Cometh) of another reality entails the neglect and ultimately the tragic sacrifice of real personal attachments. Nabokov’s interest in illusion is something more akin to Doderer’s; for Nabokov, the work of art, if it is made well, is a complete and fully extensive world. The belief in the robustness of the world of art authorizes him to pay attention to details such as the color of Emma Bovary’s eyes, or the floor plan of Mansfield Park, or the kind of insect that Gregor Samsa becomes. The sign of this robustness in Nabokov’s fiction is a mirror that behaves like a window instead of a mirror. The sky in a puddle of water, the spectral furniture in the windowpane of a house lit from within, the dancing hands of a piano player in the polished surface of the instrument—these seem to be reflections of things in this world, but in fact they are cracks in reality exposing a deeper, artificial world. The difference between the second realities of Nabokov and Doderer is that the former needs a special object (such as a novel) to get there. Doderer can make a second reality out of practically anything: not just works of art but also medieval history, Hungarian statehood, and human flesh.

Another useful formula for Doderer’s characteristic effect might be the moment in Chekhov’s story “The Lady with the Little Dog” in which it suddenly occurs to the character Gurov that his extramarital affair might be a universal model for all social relations. For Gurov, this image of a world in which everyone has a double life is only a passing fancy: he dismisses it, and Chekhov does not develop it. Doderer describes a social universe in which the doubling of life is available to everyone. All his characters are working on techniques for widening the cracks in reality and slipping through them. “All you know how to do is hide under a blanket,” one of them says.

There is something “hermetically sealed” about all relations, as Doderer puts it in his late novel The Waterfalls of Slunj. Even when an intimacy is triangulated or publicized, part of it remains intimate, “private property,” known only to those who are directly involved, each of whom remains partly cut off from contact with others. Doderer’s characters lead double lives, which means that they become different people in different relations. In the first “Divertimento,” a stationary cashier in a café has an affair with a student, and until the very end of the story manages to keep from her lover the history of her career as a mental patient. In the third, a man devotes himself to his daughter to substitute for the loss of his wife who died in childbirth, then substitutes an obsession with an opera singer for what he now considers to be an incestuous over-attention to his daughter; in this way, according to the daughter, the singer “gives back” her father. With characteristic sensitivity and interest, Doderer narrates the transformations that his characters undergo when they cross the divisions they have erected in reality.

The second realities of Divertimenti and Variations have an apocalyptic quality that the later novels lack. The primary reality is a “spider web across a water tap,” a fragile structure waiting to be destroyed by a jet of water; or it is a little town in a valley that “will soon come to lie totally submerged under a reservoir being built for a new electrical power station.” How does the world end in Austria? In “Divertimento No. 4,” a radio operator dreams of a universal flood that leaves only a small group of survivors at his radio tower; he leads the survivors into Vienna not to rebuild civilization but to submerge the books and maintain a condition of ruin. In the first “Divertimento,” a mob smashes the windows and loots the cafés of Vienna, and the “human degradation” of this scene inspires both a love affair and an episode of madness. In these pieces, no more than one reality can be maintained at any time. Thus the emergence of a second reality requires the obliteration of the first.

The most distinctive feature of Divertimenti and Variations is probably their formal experimentation. The attempt to imitate musical form through the use of recurrent phrases, however, is not convincing—although Doderer clearly knows a lot about music, and musical performance is an important element in most of the pieces on the level of plot. He is probably responding to some of the heroic modernist innovations in the form of the novel, but he lacks the sense of narrative perspective that motivates many of these experiments. He is interested, rather, in the problem of how people make worlds, and doesn’t seem to care about how his characters know the world. His work deserves attention for its beauty, its psychological insight, and its alternative genre of modernism. The appearance of this book is an encouraging sign of that attention.