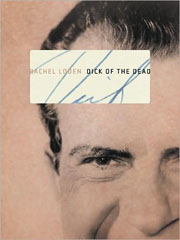 Rachel Loden’s major preoccupation, Richard Nixon, dominates again in her electric collections of poems, Dick of the Dead. In this book, Nixon is the door through which pours all the tattered and tacky debris of the twentieth century—politics, art, sex, lies, videotape. He functions, however, as a negative icon. Rather than gathering he splinters; he introduces chaos rather than coherence. As sharers in his society we mirror him, too—we are accomplices, and cannot help recognizing our face in his.

Nixon and his era figured largely in Loden’s own history. She was a “red-diaper baby” reared in the protest movement, which gave her both a difficult childhood and an insider’s knowledge of current events. In an interview with Kent Johnson in Jacket 21, she explains, “My Richard Nixon is not simply Dr. Evil. He’s not (just) a literary contrivance or a way to score small political points. He’s more of a muse. Or a death’s head. Sometimes I think of him as a dancing-master, and we’re doing a kind of aberrant minuet.” Richard Milhous Nixon does indeed dance around in these bizarre, quirky poems; events from his life are threaded amidst current events, memories, bits of history. And this book introduces some new steps.

While Loden has penned previous Nixon-themed works, cleverly combining oddments of strange information in a kind of mad reportage, Dick of the Dead produces a new invasion of twentieth-century ghosts—ghosts from politics and art, ghosts of style, ghosts of belief. These spooks are more literary than previous ones. Wallace Stevens is the fattest ghost; others include Rainer Marie Rilke, Robert Desnos, T. S. Eliot, Ezra Pound, Sylvia Plath. The poets slip in and out among other elements of the century, from Seinfeld to the Microsoft Corporation.

in the Graveyard of Fallen Monuments. Leonid,
I say, it’s Dick. Where are your goddam legs?

Seems like yesterday you broke out the Stoli
at your dacha, and we laughed about détente.

Many of the poems start with a bang, yanking the reader in by the hair. Who would stop reading a poem that began, “The disposal of the dead is exempt from VAT”? Or another that begins with a news quotation, “There is a huge backlog of animal patent applications,” followed by the poem’s first line, “Which explains all the barking and thrashing around in the gene pool”? Then there are the riffs. A Rilke fan will be both attracted and horrified by the beginning of “Autumn Daze”: “George, it’s about time. The summer was really gross.” Ditto for the Plath reader as she launches into “The Sylvia Plath Story”: “First, are you our sort of a villain? / Do you wear / Jodhpurs, a codpiece or a crown?”

Notes provide some background for popular-culture references that those born after Nixon’s day might not recognize. Fortunately the notes don’t over-explain the poems, and older readers may find that they are useful for confirming guesses.

How can someone write multiple books centering around a figure like Nixon and still continually be original and fresh? Nixon’s circles seem to be widening in these books; single elements in his life—like the death of Checkers—touch and reflect more and more areas. This book is especially unusual for the range of its styles. Some of the poems are burlesques; some use tight metrical forms; some explore the furthest reaches of free verse. There are poems that deliberately jangle, poems that sprawl crazily across the page, an occasional friendly one that curls up and scratches the back of your neck. They differ too in what they demand of the reader—a few are immediately clear, but most require rereading and yield new meanings with each approach.

Many readers are waiting to see where Rachel Loden’s poetry will take her next, but wherever it is, Richard Nixon will likely go with her.