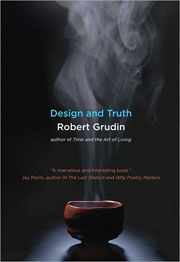 Design and Truth is a compelling book, until it isn’t. With that said, it still deserves a place on the library shelf of anyone who is interested in design and, more specifically, concerned with its philosophical and moral underpinnings. As Robert Grudin ably points out, design—product, architectural, urban, landscape, scientific, economic, political and religious systems, and cultural norms—underlies and permeates all that we do. “Design is the purest exercise of human skill. . . . Each new design is a new discovery, conveying a specific truth about our relationship to nature and to each other,” he writes.

A slim volume bolstered by very few images, Design and Truth begins splendidly with the recounting of Sen no Rikyu’s redesign of the Japanese tea ceremony. The 16th-century tea master repurposed the ceremony, historically defined by ornament and power and exploited by the rich and noble, to one infused by simplicity and integrity that stressed the equality of all who participate in it. Unfortunately, Sen No Rikyu’s increasing popularity and influence led the warlord Toyotomi Hideyoshi, with whom the tea master had missed an appointment because he was drinking tea, to order him to commit suicide—which Sen No Rikyu did, in 1591 at age 68. Grudin’s insistence about the power of design, even in unexpected scenarios centuries ago, is well taken.

The book is divided into two sections, “Homage to Rikyu: Design, Truth and Power” and “Homage to Vasari: Design, Knowledge and Energy.” The former explores design in the marketplace and argues that design tells the truth. Part two places design in the realm of psychological and social dynamics and the ways, “both conscious and unconscious, in which we design our mental worlds.” Individual chapters run the gamut from “Designs of Darkness” to “Jefferson’s Gravestone: Metaphorical Extensions of Design.” Although preaching largely to a choir of design aficionados, Grudin deftly reels in the stray skeptic on design’s omnipresence and its many permutations in all areas, from art to politics to money. His arguments are persuasive. Grudin believes, “Design shapes, regulates, and channels energy, empowering forces that might otherwise be spent chaotically. . . . Every realized design is a module of embodied knowledge and much of this knowledge is readily translatable into words.”

In chapter after chapter Grudin leads the reader on an intellectual romp, exploring and comparing vastly different aspects of design across centuries and cultures. In a scant few pages he nimbly jumps from Sen no Rikyu’s demise to the design superiority of the Norton Dominator 99 over the Citroën Deux Chevaux, the latter with which he collided in Paris in 1960 (Grudin’s Norton prevailed). He cites the Jaguar XKE (1961-68) as the “essence” of design energy and the Ford Edsel (1958-60) as the opposite because of its “exploitive quest for mass-market appeal.”

A discussion of form and function is explicated through a comparison of the Charles Eames lounge chair and an Ettore Sottsass crystal goblet. States Grudin, “Such variations occur because design mediates between creativity and economics. The energy field created by a given design is situated in the larger energy field that is the marketplace.” Ultimately, according to Grudin, design embodies a moral character because it is located in the marketplace, being either a “muse” or a “prostitute.”

Seemingly, nothing entangled in the grand cabal of design is left unexplored. Among the dozens addressed are the above mentioned as well as Churchill, Minoru Yamasaki, Heidegger, Marcos Aurelius, Francis Bacon, Simone Weil, Vitruvius, Machiavelli, Shakespeare, Sofonisba Anguissola, Castiglione, Socrates, Boccaccio, the Bauhaus, Cicero, and Toqueville. Lou Dobbs and Hitler even make appearances. President Obama, George Bush, and Teddy Roosevelt each have a place. And that is just for starters. Even baseball is fleshed out as a social design in time, albeit existential.

Somewhat miraculously it all makes sense. But midway through the second part, Grudin loses his way as he relates personal experiences consulting with corporations about how to improve their ill-designed management structures. Reading that a CEO rejected Grudin’s corporate philosophy because it defined corporate activity in moral terms has, perhaps, momentary interest, but the author’s larger narrative becomes tedious and ostensibly self-serving. His notion that cooking is a form of design and can be “subtly redemptive” is embraceable but do we really need to know how walking his dog benefits his “time design”? After a provocative read, the book grinds to a halt during the last fifty pages, where we are asked to consider how Grudin’s “daily schedule included a range of intellectual levels from Shakespeare to a Labrador retriever and a range of design challenges from a seminar syllabus to a smoked turkey sandwich.”

In 1525 Frederico Gonzaga, ruler of Mantua, invited the artist Giulio Romano to build and decorate his palace. Grudin compares this to the design process of the World Trade Center; the point is that Gonzaga gave Romano free reign to design what was appropriate for the site, whereas Minoru Yamasaki’s initial, more modest design for lower Manhattan was overruled by the Port Authority’s much larger complex, and one ultimately far less safe. The rest is history. Tellingly, this is where the reader is provoked by Grudin’s approach and knowledge of design. In such ways does Grudin provoke readers to think about how design indeed governs our lives.