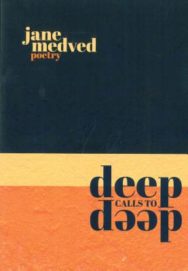 In her debut poetry collection Deep Calls To Deep, Jane Medved immerses her readers in a world of contradiction as evoked by Jerusalem, the city she calls home. It’s a place where each stone has a story, if a person chooses to listen, and Medved does. The poet takes her readers through an ancient gateway into a universal subconscious, exploring the permeable membrane between time and place in a collection of poetry divided into five sections—the last, tellingly, titled “Prologue,” a clear display of belief that time is circular.

Time is also a force to be contended with, escaped only in sleep as the heavens look down on earth in “Month of Dreams”:

at our nightly impudence. These humans
who will not stay put, but venture out of
their domain with infinite audacity.

The section titled “The Ninth Villian” gives the reader Medved’s rendering of place, a Jerusalem that is never firmly situated in the present. In “The Last Time I Saw Herod,” the king’s vicious murder of his wife Mariamme lurks right above us:

He was banging on the gate
even though there is no way
to know that we are in here.

Place, time, and Medved’s interior life flow together in “Leaving a Note at the Western Wall,” a concrete, spiritual act at a sacred place where routinely

the matriarchs and their children press letters
into fists of stone while God sends back his answers—
No and no and no.

But all is never lost, as time is circular and there will always be a chance to begin again, as seen in the book’s closing “Prologue”: “Look, a piece of moon is carved off. That means we must start over. / That means we are counting again.” This is a collection in which ancient wisdom confronts modernity, the secular faces the sacred, and death is presented with life. Deep Calls to Deep is a fitting title for all the depth that is explored here.