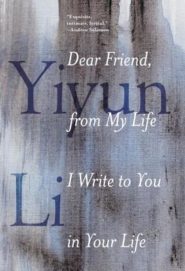 You need not be a Yiyun Li fan to appreciate this meditation on the literary life, but you should be willing to immerse yourself in the concept of being a devoted reader of literature. As she relates in this collection of autobiographical essays, the writers that formed her became her lifeline as she endured crushing feelings of isolation and suicidal depression.

“Between two hospital stays,” Li writes in the chapter “Amongst Characters,” “I was in London for a few days by myself. The hotel, a narrow house on a quiet street, had a strip of garden guarded by high walls, and I spent much of the time there reading Katherine Mansfield’s notebooks.” Here as throughout the book, Li resists discussing her struggles as central; rather, she uses acute episodes of depression as milestones along her life’s journey with her most admired literary figures. Li goes on, for instance, to delve deeply enough in Mansfield’s notes to find and pore over minutiae like grocery lists. She devotes pages to Philip Larkin’s obsession with Thomas Hardy, while only using a page and a half on personal musings such as, “Is the wish to escape suffering selfish?”

While writing from a deeply wounded perspective, Li’s commentary on literature’s importance should resonate with many readers:

Isolation, I was reminded again and again, is a danger. But what if one’s real context is in books? Some days, going from one book to another, preoccupied with thoughts that were of no importance, I would feel a rare moment of serenity: all that could not be solved in my life was merely a trifle as long as I kept it at a distance. Between that suspended life and myself were these dead people and imagined characters. One could spend one’s days among them as a child arranges a circle of stuffed animals when the darkness of night closes in.

Li’s unique and devastating meditations on language also play into this self-portrait. The chapter “To Speak Is to Blunder but I Venture” covers her abandonment of the Chinese language for English; she characterizes the shift not only as a transition from one form of communication to another, but as a choice she makes to immerse herself in a private, highly literary world. She becomes unreachable in many ways to the China she left behind, but also acknowledges the difficulties she encounters as a result. “People often ask about my decision to write in English,” she writes;

The switch from one language to another feels natural to me, I reply, though that does not say much, just as one can hardly give a convincing explanation why someone’s hair turns gray on this day but not on the other, or why some birds fly south when the temperature drops. But these are inane analogies, used as excuses because I do not want to touch the heart of the matter. Yes, there is something unnatural, which I have refused to accept. Not that I write in a second language—there are always Nabokov and Conrad as references, and many of my contemporaries as well; nor that I impulsively gave up a reliable career for writing. It’s the absoluteness of the abandonment—with such determination that it is a kind of suicide.

Yiyun Li’s autobiographical discussions of literature and isolation are not to be approached lightly. This book is for the reader willing to acknowledge that language and literature have the power to influence, form, and even save us.