Trey Sager’s Dear Failures and Michael Ford’s Where We Expect to See You Soon are unlikely bedfellows. In fact, they’re not really bedfellows at all, except that both chapbooks were recently published by Ugly Duckling Presse. Where Ford’s collection is written in a form he invented called the “89”—the lines, stanzas, and syllables in each poem end up factoring to the number 89, a move that would make Marianne Moore’s tricorn hat spin with delight—Sager’s collection follows a looser, less mathematical design, with each poem addressed, in epistolary fashion, to one in a series of supposed failures. But when it comes to what their respective structures contain, both are shot through with a peripheral but palpable nostalgia and a subtle, driving generosity.

For Ford, the nostalgia comes in parcels laced with counsel, brief correctives directed less at anyone in particular and more toward the good of the city, the self, or all who might listen and make good of it, as in “The New Atlantis”: 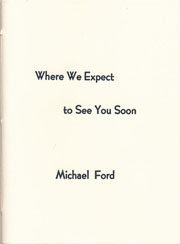 They did this, built a new earth with artists’ hands, because

What couldn’t—or wouldn’t—last on dry land is given a second chance here in open waters. The wooden ship, “the patches of brown cloth,” are remnants of the past—yet, in this new Atlantis, they clearly replace ferris wheels and billboards, a sort of inverse progress also responsible for trading the many regrets of Icarian citizens in favor of a “bowl of loose / flowers and everyone you know.” In the title poem, Ford is feeling nostalgic again, though this time he advises

ing through the letters from the dead—carr-

There’s a regular sense in Ford’s work of the small stuff of everyday life billowing toward the epic, a grand narrative that might offer some version of redemption, or at least momentary relief. For Sager, though, the past is less a corrective for how to live and more a touchstone for how to continue living, as in “Dear Charles”:

After a huge blizzard in the late seventies, I jumped off my neighbor’s roof
into what I thought was a cushy, six-foot pile of snow,
but it was actually a row of bushes camouflaged by the storm.
I fell through the bushes all the way to the ground, and the snow above me caved
in all around me.
I started screaming, but I was alone and no one could hear me,
so slowly, like a woodchuck,
I climbed my way out.

Sager’s sure-footed language makes this fable completely believable, and the speaker’s whimsical, woodchuck-like instinct to survive seems to carry over into the chapbook’s other poems. This is a speaker who, in “Dear Nostalgia,” says things like

Last night I ate a huge pot brownie and took my dog for a walk.
While he ate street grass, I began thinking about the over-simplicity we have
conferred upon dogs. 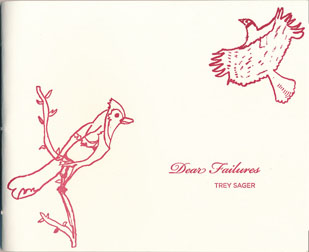 After some time, we wandered around and found some privacy behind a few trees.
But gusts of wind curled through the pine branches, and as we tossed small handfuls of
my mother’s ash into the air,
the wind spit her dust back at us, onto our faces and hair,
and into our open mouths.

To braid what’s humorous with what’s moving, and vice versa, takes a deft hand, and Sager’s got it.

To be sure, each poet has a tendency to challenge readers in ways that don’t necessarily pay off. Ford’s constant use of the em dash renders it inert in places, which is a shame, and his fidelity to the “89” means some words get distractingly spliced at the end of a line. Sager risks coming off as too erudite with his numerous literary allusions, which, in turn, threatens to undercut the sincerity that seals so many of his poems like wax on a folded letter.

But all that’s forgotten when, for example, Ford writes, at the end of the title poem:

or when Sager, in “Dear Modifications,” closes with the following lines:

Plato, in the Republic, says that poets must be exiled.
Shelley calls poets “the unacknowledged legislators of the word.”
I remember the blue jay’s eyes, looking up at me through the foot-length ferns
like I was going to kill him.
Just the exact opposite, I thought, cradling him in ski gloves.

For being such structurally different creatures, Ford’s Where We Expect to See You Soon and Sager’s Dear Failures both slug you squarely in the gut, and each has a dogged decency that’s difficult not to welcome.