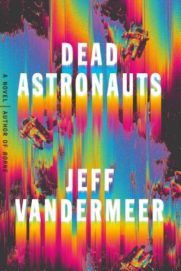 I tried, but failed, to write a review of Jeff VanderMeer’s latest novel, Dead Astronauts. The first draft began by describing the work as “a beautiful abstract mosaic.” That was both right and not right. Like an abstract piece of art, the more time you spend with it, the more it reveals itself to the reader. But that isn’t quite right either, VanderMeer’s text rewards a careful, thoughtful reader, and does that reader the honor of treating him or her with respect. Too often novels feature sections or characters whose only purpose is exposition, to make connections and allusions obvious—but this is lazy writing and makes for lazy readers. Had I said that in a review, though, my fear would be that readers would assume that Dead Astronauts is a difficult book, which it isn’t.

Is it a beach read? It depends. Do you like foxes (blue or otherwise), salamanders (and beings made entirely of them), astronauts (dead and/or alive), animal experiments, The Company, and Charlie X? A friend of mine would call this a “thinky” book, which describes every book I enjoy; I want to be able to engage with something new and to see artists push boundaries and challenge convention. That’s what VanderMeer does. Contrary to what other reviews have said, nothing here is frivolous, nothing is accidental or intentionally included for the purposes of obfuscation. In the tradition of Richard Adams’s researching rabbits in order to write Watership Down, VanderMeer researched the various animals in the novel—salamanders, foxes, beetles, a Behemoth, a Dark Bird, and more—and produces convincing, unique perspectives from each animal. The animals are treated with the respect they deserve.

In my failed attempt at a review, I addressed various design aspects: the ridiculous beauty of the dust jacket, the ornate section dividers in the text, the gray-colored font to help readers recognize a consistent voice later in the novel, the inclusion of hand-drawn art, and the careful alignment of the author’s name and title of the book on the spine, so that it reads, “Dead Jeff” and “Astronauts VanderMeer.” I also included a mention of the staff at the Tallahassee Midtown Reader, and how they orchestrated signed copies to all who wanted. And what review would be complete without mentioning that 20% of the book’s royalties go to the Center for Biological Diversity and to the Friends of the St. Marks Wildlife Refuge in Florida?

Where other reviews spoke about the narrative unwinding towards the end, mine argued that while the narrative structure became more experimental, the narrative actually came more into focus, providing a sense of cohesion (and gravitas) to everything that came before. I also challenged the label of “Weird Thoreau” that I so often see attributed to VanderMeer. It really didn’t have anything to do with this specific book, which is part of why my review failed, but I feel like the label diminishes VanderMeer’s work. Thoreau seems to be a lazy adjective for “environmentalist,” which isn’t a label VanderMeer would deny, but a comparison to Atwood’s MaddAddam trilogy is more apt.

Finally, I also wrote about my experience of listening to the audiobook versus reading the physical text. When a book like this—one so beautifully constructed and carefully laid out in print—becomes adapted to the audiobook format, I’m always curious to see how that translates. It is both the same and not-same experience. Voices carry the weight of differentiating between characters, but the illustration, white space, and other graphical flourishes are lost in audio form. The audiobook is as good an adaptation as could be hoped for, and I certainly found myself engaged in different ways—catching things I missed in print—but the beauty of the book design makes the print format the way to fully enjoy this work of art.