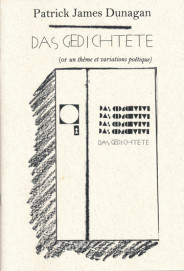 Nothing appears further from fashionable at this moment in poetry, and perhaps in the larger art world as well, than alignment with the Modernist project. Somewhere between Pisa and 1968, signal and summit of the Fall, the idea of a singular vision is switched out for plurality. Mutations or evolutions of old ideas crop up in new generations. Color-fields broken free of painterly affects make textures, impasto, out of their own concrete situation. Surrealism forgoes revolutionary politics as it enters into Young Adult territory.

And what happened to that old chestnut the Long Poem, the one that tells the tale of the tribe, putting history, and the history of ideas, to music? Zukofsky’s “A” is perhaps the last major work in this line. “A” starts off as a historical poem, but, to our benefit, becomes something else, doing for the Long Poem what Stein did for prose and Dickinson did for the short poem a half a century and more earlier. After “A” comes Ronald Johnson’s Ark and Ron Silliman’s Ketjak, Long Poems casting language against itself, wherein appear event and idea treated as musical note or node, shining, however distantly, in the constellations made by these later works. This is a mutation (a term I use with a neutral if not positive tone) of Pound or the younger Zukofsky.

It is a relief to come across something so apparently out of fashion as Patrick Dunagan’s new chapbook, preposterously titled Das Gedichtete or un thème et variations poétique. The bathic nature of the title, in three languages, is a pivot that might catch a potential reader scanning the shelves with the apparent faux-Romanticism one would expect to laugh at ironically before plunging into a contemporary work more hip, twee, and introspective.

What we have instead is decidedly old school; much of the book is culled from the poet’s readings of Theodor Adorno’s music writings. It is hard to make concrete images with Das Gedichtete. The language seems to blend the poet’s thought of and with Adorno, great underminer of Enlightenment ideas. So a forest quickly turns toward the stars, measuring atoms, in the second stanza:

Dunagan’s primary musical vehicle can probably be most closely compared with Creeley, in that he uses loosely defined, variegated patterns to shape and pace his thoughts, in series of lines and stanzas of comparable lengths. This is where one strain of the Modernist canon has brought us, extant today in the funny Brooklynese punk and blues renga of Ted Greenwald, or the meditative rosaries of Kyle Schlesinger.

It is nuance where the magic happens in this poetry, and probably in all poetry. In an epigraph that precedes and dwarfs one of the shortest sections of Das Gedichtete, Dunagan appropriates a statement by free jazz anomalist Sun Ra. Beginning “honesty is not what I’m talking about,” Ra, self-described Martian bandleader, expounds on the credibility of deception, the necessity of being “evil and wicked like me” when taking on the white race. This openness to duplicity in tactic and also the necessity of belligerence calls to mind the late Amiri Baraka, but what in God’s name does it mean in the context of this poem? The epigraph treads directly into

born into this
eternal delight
how suddenly
it lasts

It only takes a turn of the page from the epigraph to move from Ra's militant jazz to the existential and ironic ontology of "born into this /eternal delight / how suddenly it lasts" —not exactly a refutation, but perhaps an existential crisis rendered sublime. The poem continues:

In “Breaking clods of earth,” we have the first and only possible echo of the violence suggested in the epigraph, unless the dissolution of the “matched colors” changing “to mist” is some kind of eschatology. Which it might be. This poem doesn’t have the implied political programs that led to discontinuity in the Cantos or in “A,” unless it is one of postmodernity. It is an apt time in history, musical and political, to invoke Adorno while scrutinizing his ideas, and the musical form is an appropriate setting for them. The anomalies of voice that appear in Sun Ra (and a couple pages later in sexual proclamation) add an indeterminacy more worldly and human than the meditations from an ivory tower. Once removed from its midst, the appearance of Sun Ra can be seen as a perfect ideological counter to Adorno, who—as a Marxist at a time when it appeared to everyone else to be Communism’s most valiant hour—found that theory needed its own internal revolution before a praxis could be developed to support any revolutionary goal.

So Sun Ra appears as everything Adorno isn’t, an improvisational musician and thinker who expounds that theory must bend to meet necessary action. In the collage of fragmented voices that is the Cantos, Pound never offers a dialogue so equally weighted as this, only parody and mockery of his opponents. Dunagan’s poem, then, has an ironic coherence in the disparity of its thoughts set to music. Its philosophical paradises, if they exist, are not clearly defined, but the images contained in its rhythms invite repeated investigations, as the best modern poetry always has.