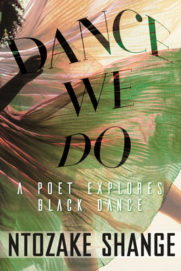 Dance We Do is a celebration of Black dance history, community, and mentorship that is as joyful and complex as its author. Ntozake Shange died before the book was finished, so it fell to her personal assistant Reneé L. Charlow to complete the task. While Shange will always be known for her influential and groundbreaking choreopoem for colored girls who have considered suicide/when the rainbow is enuf, “dance itself was Shange’s truest home,” as Alexis Pauline Gumbs points out in her foreword. Gumbs reminds us that Shange’s “life project” was to teach us how “to confront that which cannot be said. How to move through that which stills the blood. . . . Though for Shange this learning process was forced by a painful and debilitating series of strokes and a neurological disease, we cannot forget that it was Shange, with her brave poetics, her slashes and insistence that poetry must move, who retaught us to how to speak, to read, to walk, on purpose.”

Shange begins her documentation of the unheralded history and philosophy of African-American innovations in dance by recognizing the importance of Katherine Dunham, whose “exquisite care for the Black body that saved me from my wildness and the arbitrary forms of Black vernacular dance that came so easily to all of us, but left no traces of our history from one generation to the next.” Shange possessed a natural ability for dance, but was ashamed of her cultural roots until the Black Arts Movement blossomed in the late 1960s. She soon realized that “not only were our so-called ‘natchel’ talents art, but they were a gift to the world, a craft.” Shange set out to learn as much as she could about the art form.

Seeing the dancers in the Sun Ra Orchestra perform in Los Angeles was a transformative experience. Shange got to know the dancers who accompanied the group, and soon became part of a close community that she compares to Deadheads. Each chapter of the book focuses on a different dancer or choreographer, and alternates between personal anecdotes and an interview conducted by the author. She describes Raymond Sawyer, whose work influenced for colored girls, in exquisitely poetic terms: “Raymond Sawyer floated across space as if he were a heron. His arms took on the character of cypress tree limbs, cutting through the air casually but with grandeur.”

This book is not just for the initiated. Shange provides a glossary of dance terms and skillful descriptions of performances and floor exercises. There is an intimate generosity to the insider’s perspective Shange so lovingly offers, such as this memory of Sawyer:

Once he entered the large dancing space in a silken cape and crown, being carried gently by the male dancers of the group. He looked like an emperor as the women dancers danced below the cape and carried it higher toward the ceiling so that we became like a parade of Black and Filipino bodies on the Divisadero Street: Raymond Sawyer’s Afro-American Dance Company. Out the front door we would go, making strange grunts and howls as we dared the street people or the police to halt our caravan. Down the hill toward Minnie’s Can-Do Club and the all-night breakfast deli where we would relax and in-vibe. Raymond Sawyer’s dance classes were a way of life that took charge of one’s days and nights, leaving the body exhausted, muscles aware and in good form till the next time.

The book is packed with conversations between friends, collaborators, mentors, and students. Mickey Davidson taught Shange a secret of improvisation when performing Shange’s choreopoems in San Francisco: “Always have one new thing.” Dianne McIntyre educates us on the role that dance traditionally plays in Asia and Africa: “When I realized the power and importance the dancer had in those societies as the people who communicated with the deities, kept the communal vitality of the people going, continued the history, and embodied the rituals, I realized that to be a dancer was not a frivolous thing. . . . After that, I went for it.” Shange asks the same questions of more than one dancer, such as whether they have a preference for live or recorded music. Davalois Fearon comments that live musicians cause dancers “to be on your toes . . . because sometimes they’ll stretch out that note. That is so fun . . . you have to really be in the moment. There’s a different kind of presence and awareness that live music brings.”

Dance We Do is a welcome and necessary corrective, a bold effort to establish that which has been forgotten or even erased from art history. Otis Sallid followed the model of his mentors, deciding to “pay it forward” by leading free workshops: “There is a need to preserve the Black dance tradition, which is most powerful and creative. I try to pass it on. There was a time in the late ’60s when Black dance was a power to be reckoned with. This time in Black historical dance has never been preserved or collected. No one knows about it. So, I teach about it as much as possible.” Sallid sees choreographing and performing movement as a sacred activity: “You are lifted up and out of your body to a place that allows you to move through your work with ease. This place is your arsenal of remembrance. It is your inspiration. It is your muse working through you.”

Memoir and cultural history aim higher than egotistical claims of importance. They hope to leave a record of one’s time on the planet so that others will have a sense of continuity as they build on the work of their elders and ancestors. It is hard to imagine how Shange found the strength to work on her tribute to Black Dance as she was doing what Gumbs refers to as the “almost impossible work of rebuilding and reimagining her own relationship to the physicality of her body, brain, voice, and how she could move in the world.” According to Reneé L. Charlow, Shange “felt writing was a physical process and said she would often sweat while she wrote because her work was so intense and mentally taxing.” Shange’s choreopoems, in her own words, “combined two of [her] favorite art forms” into an impassioned expression of Black history and culture; Dance We Do is an essential addition to our cultural history and to Ntozake Shange’s legacy as a pioneering creative force.