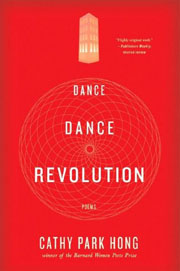 When one thinks of the thematic territories explored by Asian American poets, it is reasonable to conjure up images of the common immigrant experience, unique family dynamics, or self-discovery amidst conflicting cultural pressures. Yet Cathy Park Hong proves that ethnic background is not simply a funnel that limits the scope of imagination. Rather, it is a lens through which the ever-shrinking world around the poet is clarified and magnified. In an interview with Poets & Writers, she aligns with this concept: “I’m not saying that my ethnic identity plays a scant role, but it's now more temperament rather than a subject matter.” Hong’s sophomore release, Dance Dance Revolution, employs an unapologetic linguistic energy and a grasp of recent Korean history to forge a story that is both lighthearted and worldly, both comically absurd and solemnly nostalgic.

The overarching narrative of the book takes place in 2016 in a city somewhat like Las Vegas, where tourists can enjoy material luxuries from all around the world at various themed hotels. The protagonist, referred to as “the historian,” arrives in this manufactured melting pot of cultures to interview her father’s ex-lover, known as “the guide.” But this book is perhaps most characterized by Hong’s invented language “Desert Creole” that is spoken by the guide and recorded as poems. In her first book, Translating Mo’um, Hong writes: “What are the objects that turn me on: words.” Desert Creole, then, embodies a form of hyper-indulgence as it draws from numerous languages: English, Spanish, Korean, and some form of Caribbean pidgin, to name a few. It is this complex, messy world that Dance Dance Revolution begins to dissect and expose to readers.

Ironically, the guide character is both assimilative and authoritative with language. In the past, she was considered the voice of a revolution:

This powerful recollection of a political uprising suggests Hong’s conviction to keep the past alive through story. The reader focuses less on the language itself—which is rendered somewhat arbitrary by Hong—and more so on the image and “passion o rally.” Her nod to this event is dynamic. It is as though the historical incident is being projected into the future, where it can survive and teach a world that is growing but really shrinking due to globalization.

Despite the guide claiming “no relation / ta Hapanese dance game . . . ipso facto no dancing / eider in de revolution,” the title is a nod to the popular fitness video game in which players mimic the dance moves appearing on a screen. Is this simply a flippant attempt to attract a younger audience? On the contrary, it sets in motion various themes of mimicry and disobedience. Poems such as “The Lineage of Yes-Men,” “Cholla Village of No,” and “New Town” give a glimpse into the challenges of liberty. In the latter, we read, “Law / is the sin of choice.” Hong complies with very few grammatical “laws” and remains free to invent, to choose a new world that suits her imaginative project.