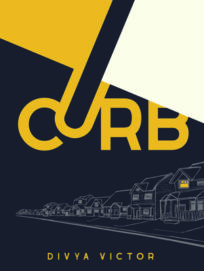 True to its history, the United States today harbors its latest iterations of anti-immigrant violence. Rhetoric abounds on who is allowed and who is not. Experiences and facts are nullified. Waves of violence and persecution against Asian American communities across the country show up in the news on a near-daily basis. Stories flood the commons, stories of endurance, survival, and defense of identity, and stories of presence, inclusion, and citizenship.

These stories are vital, and in her fifth book, the bleak but necessary CURB, Divya Victor proves herself to be worthy of the challenge of telling them. Building a powerful exposition from both personal reflection and its refraction through the external world—homes, curbs, lawns, and pavement—this collection captures the cultural moment while also relaying the past, never letting up, never forgetting, always connecting us and projecting possibility and repair:

When I read the news
of the shooting, these ears rang
the phone-lines of the dead, called
for the knowing trill, the scatter
of sugar, of a spoon circling
a milk tea for one
on the other side
of the world.

CURB’s poetry concerns South Asian immigrants, centering individuals who have been targeted by acts of violence within the United States since the early ’90s: Balbir Singh Sodhi, murdered in Mesa, Arizona; Navroze Mody, murdered in Jersey City, New Jersey; Srinivas Kuchibhotla, murdered in Olathe, Kansas; and Sunando Sen, murdered in Queens, New York. These four, whose lives were brutally stolen in acts of racist violence, may be the subjects, but they stand for more. They illuminate the stories, collectively, and shine the spotlight on those hypocritical U.S. systems that at once provide liberty and push it away through violence and murder:

Victor’s approach is harrowing, yet tactful. In CURB, she creates a tribute while weaving in personal reflections and elevating the memories of self and other equally. These stories twist between American reality and Indian origin, balancing human presence over otherness. In “Lawn (Arid),” the poet writes of the landscape of Trichy, India, visceral and visible. “Blood/Soil” recalls the Nazi slogan while exploring, in graphic detail, the attack on Sureshbhai Patel in Madison, Alabama, by a white police officer. In the context of violence, oppression, and colonial history, Victor poses questions: How do lives get represented? Who crafts their histories? Where do they become realized, and how are they understood? Like its spiritual predecessor, Claudia Rankine’s Don’t Let Me Be Lonely, much of CURB concerns securing a space for questions and conversations.

Perhaps most importantly, CURB bridges the collective trauma that Asian Americans face every day with a very real sense of hope and optimism, and Victor invites us in—all of us—to share the commitment and vigor that results. The book, thus, is an invitation to learn, to support, and to transform:

A mark in the body to remember the work of being a paper
person, with or without papers. A living milestone to mark the
work of being nothing to you.

A mark in the body to remember the day when you leaned close
to someone else who reminded you of someone you once held
close. A stranger who is like family. Kith.

CURB is a literary milestone that may initially feel minimal in structure (its table of contents includes only fourteen items), but when read it extends to the farthest reaches of the heart. Victor channels the suffering and persistence of her subjects, and through a posthumous revisiting at once ritualistic and humanely revisionist, she builds a broader story that both honors them and includes us all.