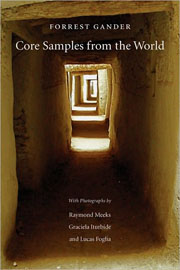 Climatologists drill core samples from rock, soil, and ice, seeking evidence of the most fleeting of natural phenomena: ancient weather. Perhaps it is no coincidence, then, that each of the four sections in Forrest Gander’s Core Samples from the World opens with a poem titled “Evaporation” that simultaneously orients and disorients the reader to what follows.

A noted poet and translator, Gander is drawn to the physical structure of the earth. In 2005, just before beginning this book, he told fellow New Directions author Eliot Weinberger in a conversation published in BOMB Magazine: “For me, besides a lifelong interest in rocks and fossils and a degree in geology, it’s Oppen’s proposal of inquiry into ‘what we stand on,’ in the combined mineral and ethical sense, that matters.” This notion certainly informs the writing gathered inCore Samples from the World, especially the haibun about Gander’s journeys to China, Mexico, Bosnia-Herzegovina, and Chile.

Haibun is a condensed prose essay originally developed in Japan as an accompaniment to haiku. Sparse, diary-like entries frame and set the stage for the haiku, often discarding the pronoun “I” and collapsing objective and subjective perspectives so that the reader is invited to witness experiences as they occur. Gander writes in the tradition of his predecessors, notably Basho’s Narrow Road to the Interior, recounting a pilgrimage into the unknown that at the same time evokes the strangeness within us all, but he also manages to crack open the form using the American idiom.

Twenty poets visit the Summer Palace on the outskirts of Beijing, for example, and as they make their way through the rooms, one “peers around a painted screen and discovers a white-haired man face-down on a table strewn with syringes.” And then comes the haiku, which doesn’t follow the conventional thematic or syllabic requirements but doesn’t need to:

Behind everything
the foreigner sees, something he doesn’t
know how to look for.

In a pattern that persists through the book, the sequence of image and insight jolts to the core. The stunned reader may begin to wonder: Did I ride upon an uneasy horse and see a dust storm blowing across the rocky plains of the Kyrgyz Autonomous Prefecture? Will I ever forget that night when Aline Davidoff stretched out on a red-carpeted staircase in a Japanese chintz dress? Why am I haunted by that old man glimpsed on a bicycle in Chile?

Core Samples from the World also contains poetry and photographs. The verses do not describe or comment on the pictures in a traditional ekaphrastic mode, but instead cohabit and resonate within the same emotional space. The four sections each feature the work of one of the three photographers—Raymond Meeks, Graciela Iturbide, and Lucas Foglia—who collaborated with Gander on this project. Foglia’s photographs, for example, come from a series called “ReWilding” that shows various people in the southeast who are attempting to live off the land. One depicts an almost naked young girl standing at the entrance of a bark wigwam, another a twenty-something white woman with a fox pelt over her bare shoulder. Here are a few of the accompanying stanzas, chosen almost at random:

Ever eat a blue heron?
Supervisor said there’s no common law
in Virginia. We don’t know how fast it’s going

a lot of outsiders.

These statements resemble snippets a journalist might collect through interviews, but Gander threads and jams the phrases together to conjure the idealism and environmentalism, claustrophobia and xenophobia, divine foolishness and apocalyptic imagination that hold together such communities.

Another section features Raymond Meeks’s photographs from a series called “A Clearing” where men, women, and children mine a bleak landscape with rudimentary tools. The verses seem to speak for the subjects of the photographs, such as a shirtless boy covered in dust and carrying rocks upon his head: “I cannot be discarded, his eyes say.” But they also reveal how impenetrable these scenes may be:

I can be read, say the rocks, but not by you.
The air is burnished, almost mineral, like a thin peel of mica.
Mound in the photograph, iris in the eye.

What does it mean, a cauterized topography?
To salvage rocks the color of all else from all else the color of rock.
I can be read, say her eyes, but not by you.

This last line presumably refers to the photograph of a young woman a few pages on, another worker squinting in a pained yet dignified expression out of the frame—but it could be about any the individuals who reside in the photos and text of this book. While Gander’s work requires close study for the layers of associations and meanings to penetrate, it leaves an impression not unlike the first morning in a foreign land. One moment, things seem to the make sense, and the next, mystery ushers in “eyes from another language.”