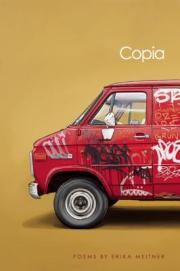 In Erika Meitner’s Copia, the abundance of language referred to in the title springs from the American landscape. From the suburbs to the decaying city of Detroit, Meitner uncovers richness of meaning in plain American language. Common objects and signage become mediums for recovering history and personal memory.

For much of the book, Meitner occupies the persona of a suburban mother who has left her itinerant youth behind. In the last section, she moves into documentary poems reflecting on the decline of Detroit. Throughout, she explores an American landscape of motel rooms and discount stores. Emphasizing the commonality of her persona, she writes:

I am a Walmart shopper, a tract-house dweller—the developments
you can see clearly from every highway in America that’s not jammed up
on farmland or pinned in by mountains. I park my car at a slant in the lot

Lawlessness underlies the banality of these surroundings, as Meitner points out by listing strange incidents that have occurred in Walmart parking lots across the country. For example:

In the face of these occurrences, however, the employee’s gestures of kindness express a genuine spirituality that Meitner labels as mercy.

The idea that spirituality manifests itself through common things runs through Copia, suggesting richness underlies an apparently barren surface. As she writes in “Cosmogony/Progeny”:

. . . there is still
the possibility of a miracle
happening in the form of
signs & wonders, wonders

Meitner’s use of found language illustrates how her view of copia runs contrary to that of the young man in “Big Box Encounter,” whose letters “feature intricate vocabulary, like soporific and ennui. / Like intervening and kinetic and tumult.” Seemingly random signs resonate as what Meitner calls, in “Post-Industrialization,” “the single greatest story of American success.” Ironically, as she later points out, “The truth is / even cities / are ephemeral.” What becomes important in the face of decay is recovering the stories of the people who inhabited the city when it was alive.

Meitner does this most effectively in “All that Blue Fire,” in which she draws out the lyricism of an autoworker’s voice as he tells the story of why he came to Detroit. Through repetition and line breaks, she gives the language of a common person the quality of a blues song:

Yeah, they go on down the line
like that. Then when it get out
to another part of the line,

they lay the motor down

Here the nostalgic voice of the autoworker captures the seduction of the industry that gave Detroit life.

Earlier, in the poems “Yizker Bukh” and “Yiddishland,” Meitner explores a quest for the past in terms of her personal history. Like the later poems about Detroit, these poems about her grandmother explore the loss of culture and a struggle to recapture the past. “Yizker Bukh” begins by comparing the process of memory to sifting through the fragments of a destroyed city:

In the face of her grandmother’s death, Meitner uses the memory of the white turban she wore to link together a chain of memories. Acknowledging the limits of recovery, she writes:

Insignificant details provide a means for recovering personal memory, but the historical memory evades recovery. The later poem, “Yiddishland,” reinforces the larger historical and cultural import of this loss of memory by framing her grandmother’s burial service with the larger cultural loss of Yiddish language.

The documentary poems in Copia echo this desire to recover both personal and cultural history. “The Book of Dissolution” figures the decaying city of Detroit as a text that leads to an understanding of the self. It opens: “Because it is an uninhabited place, because it makes me hollow, I pried open the pages of Detroit: the houses blanked out, factories absorbed back into ghetto palms and scrub-oak, piles of tires, heaps of cement block.” Meitner strives to read the fragments of the destroyed city, going on to write that “Burn scars on cement where scrappers torched the last bits of plastic off copper wire spell out code that reveals what the world will look like when we’re gone.” Ultimately, Meitner comes to identify with the landscape, writing, “I have been unoccupied I have been foreclosed I have been vacant for a long time.” For Meitner, this emptiness implies a fullness of meaning. As she writes in “Retail Space Available,” “though this world is changing, we will remain the same: abundant and impossible to fill.”