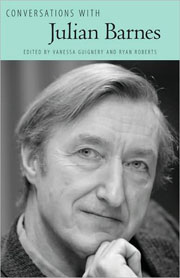 Throughout the eighteen conversations appearing in Conversations with Julian Barnes, the English author comes across as private, relaxed, mindful of his interviewer, and intelligent; the interviewers come across as dull-minded (Caroline Holland), sharp-witted and challenging (several), and whimsical (Margaret Crick). It says something about Barnes that in the worst conversation, with the disrespectful Stuart Jeffries, he retains his dignity while Jeffries comes off as a prat.

Like his contemporaries Ian McEwan and Martin Amis, Barnes is regarded as one of the leading writers in England. Over a long career that shows no signs of abating, he has written on many different topics, and the interviews here reflect this. The most frequent subjects are writing, Flaubert, satire, taboos, God, religion, death, influences, history, and journalism. There are asides on literary theory (he has no time for it), criticism (he used to have time for it, but hasn’t for some years), old age, and how to write. The editors have provided a well-rounded picture of the author, while respecting his private life.

Many of Barnes’s provocative remarks reveal his attitude toward writing and its interaction with the world. In an early newspaper interview he is asked, “What is the purpose of fiction?” and he replies: “It’s to tell the truth. It’s to tell beautiful, exact, and well-constructed lies which enclose hard and shimmering truths.” Yet here as elsewhere in the book, one can ask what truths Barnes has in mind. Those he refers to in Conversations concern facts—the few we can agree on—and a small range of specific actions. His characters make “moral decisions,” a sign of their “middle-class background,” but this only leads one to question what merit, legitimacy, or universality they could possibly have. Barnes states that “immediate questions of what’s right and wrong” occur “only in sexual relationships,”—a rich topic that doesn’t get explored thoroughly.

During the last interview, conducted by both of the volume’s editors, Barnes states that his “family’s vestigial to nonexistent sense of religion over successive generations is typical of what has happened to religion in Britain, at least in terms of the indigenous British Anglicans.” Certainly this is interesting to think about when considering Barnes’s works; however, his family doesn’t help us understand the growing numbers of adherents to other religions in his own country.

“‘The idea that God created the world in which we live, given its inequalities and injustices, is incredible. If He were an unjust God and He created the world, on the other hand, that might make more sense.’” This view that Barnes holds, more pithily summarized in his phrase “I don’t believe in God but I miss him,” causes one to wonder where morality itself comes from. It also may be a reason why he objects to his work being classed as satire, preferring the word “semi-farce.” In another interview he states that “the official purpose of satire is to chastise the mighty and to correct the powerful, but the mighty and powerful are remarkably unaffected by this.” Instead, satire’s “legitimate purpose” he claims, “is to mock the mighty for the consolation of the weak and the poor.”

Barnes is one of those writers who compose without a specific program. “Appetite comes with eating and ideas come with writing,” he says; “I never start my novels wanting to prove something; I never start my novels with any sort of thesis.” Still, we might note with Vanessa Guignery that Barnes is noted for his tendency “to experiment with new narrative forms.” He responds: “Yes, of course, it’s one of my key motivations. I think form is terribly neglected in the contemporary British novel.”

Unfortunately, Barnes does not refer to his near contemporary, Gabriel Josipovici, whose works, often of deep emotional resonance, are formal inventions carried off with grace. But the main point is taken. It’s a disappointment that so many books that are in any way outside the norm get categorized as “experimental,” which only frightens off many readers and does no good to literature. In the next interview, Barnes makes a remark that could be pasted above every writer’s desk: “But the main lesson would be a general one: to take the idea you have for a novel and push it with passion, sometimes to the point of recklessness, regardless of what people are going to say—that is the way to do your best work.” There’s really no other way to do it, though it can be a lonely road.

It is one of the insults thrown at fiction written outside the norm (whatever that is) that such work is not engaging: they don’t have characters one can get behind, the situations are not realistic, the writing is “difficult,” and so forth. Barnes speaks to this quite nicely. Responding to Robert Birnbaum’s comment that “some things can be more of a rational exercise or an emotional outpouring,” he says, “Well yes, but I think there is a lot of emotion in ideas. . . . When we talk about a novel provoking emotions, we tend to think of the emotions that have to do with our own amatory life. I think that books can be emotionally exciting in many different ways.” One could offer, for example, Robert Musil’s The Man Without Qualities and Raymond Queneau’s Exercises in Style as books whose ideas and style generate the electricity that courses through a reader encountering them for the first time.

Comfortable with the form of the interview, Barnes doesn’t repeat himself too much, which is always a hazard in such books. There is much to mull over in this comprehensive and worthwhile collection that will give new and old readers of Barnes’s work a greater appreciation for his erudition and geniality.