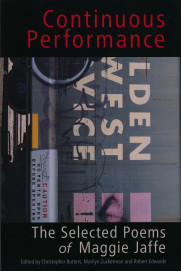 Maggie Jaffe’s poetry is reminiscent of Bertolt Brecht’s, but with a distinctive, tough-edged American voice. After getting a B.A. from the New School for Social Research in New York, Jaffe lived in Guatemala, where she was inspired by Latin American poets such as Claribel Alegría, Otto René Castillo, Ernesto Cardenal, Pablo Neruda, and Roque Dalton—poets who were spokespeople for the wretched of the earth. When she died in 2011, she had published six books of poetry, received an NEA fellowship, and had won the San Diego Book Award for Poetry twice.

This new volume of selected poems is an excellent introduction to her work. One of the poems from the opening section celebrates Cardenal’s lines “the earth belongs to everyone, / not just the rich!” by voicing them at an anti-immigrant rally on the border. Another poem looks at Salvadoran misery, but also celebrates Alegría’s hope for change in El Salvador “in pueblo-owned milpas after / sweet green corn ripens.” Jaffe wasn’t a poet for the squeamish: in one piece, a minor Salvadoran union official finds the death squad has “decapitate[d] / her five children” and placed their bodies “around the kitchen table.” The poem ends with the phrase “Shit happens.” In “Emily Dickinson,” Jaffe criticizes the nineteenth-century poet, calling her “one of the few women / you can trust to keep / her mouth shut.”

In selections from How the West Was Won, Jaffe begins with “Can’t Happen Here”—referring to the “Gen·o·cide” that did happen here, to Native Americans. The theme of resistance runs through these poems—for example, she lauds the Zapatistas as people who will “die fighting rather than from dysentery.” The poet also finds a heroine in Emma Goldman, saying that after the U.S. deported Goldman for “‘hysterically’ agitating for peace,” only “in death will they allow / her back in the Imperium.” These voices contrast with that of Jaffe’s student in “Poverty Sucks,” who feels that he has “the right / not to know about the poor.”

Jaffe’s third book, The Prisons, compassionately describes prisoners and their visitors such as “Marianne” with her “3 advanced degrees”: “She’s also doing time: / one-room Portland / flat, post office by day, / clichéd lonely nights.” The poet creates another fine portrait in “Daniel in the House of Cards” who wants to make it up to his parents who visit him every weekend, but the con next to him says that when Daniel gets out his parents will “be holding hands six- / feet under.” The Prisons has the finest poems written in the U.S. about our penal system; in this book, Jaffe also identifies with “degenerate” artists such as George Grosz, calling him “a small no in the big / YES! of Nazi Germany.”

As her career progressed, Jaffe continued to create haunting portraits such as “Kafka at Work,” capturing the author’s short, sad life in six poignant stanzas, and “Otto Dix: Artist Against War,” describing his powerful antiwar drawings created while he was a soldier in the German trenches. Jaffe wrote many poems about those artists called “degenerate” by the Nazis, such as Dix, Grosz, and Kandinsky—“‘degenerate’ because they won’t paint / golden bodies for the Reich.” Jaffe also both loved and hated the movies, as evidenced by her many poems about Hollywood; these include “Sign of the Times,” about failed starlet Peg Entwistle, who jumped from the thirteenth letter in the HOLLYWOODLAND sign, and who “still haunts the scene of her demise . . . when there’s a strong scent of gardenia in the air.” In another film-themed poem, “Letter to the Actor Charles Laughton Concerning the Life of Galileo,” German refugee Brecht writes admiringly to Laughton “as if words would save us.”

The hard-assed honesty, courage, and hope in these poems make Jaffe equal to Brecht and her other “degenerate” heroes. Like them, she refused to make safe art during troubled times; her uncompromisingly tough style bores unflinchingly into our piercing reality.