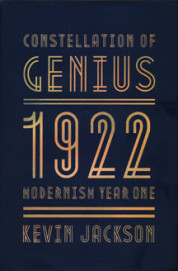 In 1922, T. S. Eliot wrote a surprisingly emotional eulogy for the bawdy music-hall performer Marie Lloyd. Referring to the colonized natives of Melanesia who were “dying from pure boredom,” he warns:

Eliot was prescient about the state of our current culture, though it is debatable whether we are dying from boredom or anesthetized from ever feeling it. What we have certainly lost is the capacity for shock and astonishment aroused by Eliot’s The Waste Land, which appeared in 1922 along with the publication of James Joyce’s Ulysses. The confluence of these literary events is the inspiration for Kevin Jackson’s book Constellation of Genius: 1922, Modernism Year One. Echoing Ezra Pound’s declaration of an annus mirabilis, Jackson claims that the early 1920s were “blazing with a ‘constellation of genius’ of a kind that had never been known before, and has never since been rivalled.”

On the face of it, this statement is ridiculous: the Renaissance, romanticism, and the Greek classical period are not so easily dismissed. Yet it could plausibly be argued that no other era fostered as much cultural innovation. Jackson’s book embraces all aspects of culture, including Walt Disney’s animated films, Le Corbusier’s architecture, Louis Armstrong’s jazz solos, and Charlie Chaplin’s tramp. Vignettes about these and many other writers, artists, musicians, and political figures are presented in the form of journal entries spanning the year 1922.

Jackson approaches modernism as an international phenomenon, though his entries mainly focus on what was happening in Western Europe. He opens the book with an essay in which he rejects simplistic explanations of modernism’s origins, yet he offers no competing theory and precious little analysis. Constellation of Genius is less literary history than a travelogue of Jackson’s reading. Occasionally he wanders off into little-known places where the locals hang out, but usually he sticks close to famous monuments: Joyce, Eliot, Pound, Proust, Yeats, Woolf, Hemingway, both D. H. and T. E. Lawrence.

When Jackson does stray from familiar territory, the results can be fascinating. For example, in an entry about a conference on Brazilian modernism, he describes the writer Mário de Andrade, whose poem-sequence Paulicéia Desvairada (Hallucinated City) and novel Macunaíma have been compared, respectively, to The Waste Land and Ulysses. De Andrade was also an influential ethnomusicologist. Jackson could have found room to tell us more about this brilliant figure by cutting out entries that have no relationship with modernism. Surely we don’t need to hear about the founding of the Reader’s Digest or trivia such as the following entry for January 20: “Christian K. Nelson took out a patent on the Eskimo Pie.”

The title Constellation of Genius suggests that modernist writers and artists formed a tight-knit community. There were some strong ties—between Pound and Eliot, for example, or between Buñuel, Lorca, and Dalí. Even Joyce and Hemingway, so aesthetically and temperamentally dissimilar, liked to go out drinking together. But in general, these figures worked in isolation from one another. Jackson’s approach obscures important differences among the multiple strands of modernism, which occurred in different times and places. Some modernists embraced mass culture and technology, some rejected it, and some were both inspired and repulsed by modern life.

Although Jackson’s book lacks complexity, it is solidly written and often entertaining. Many of his best entries are lifted from the diaries of people such as Count Harry Kessler and Virginia Woolf. The latter is especially amusing, with her acid envy of Katherine Mansfield and James Joyce, who aroused her unbridled snobbery:

I finished Ulysses, & think it a mis-fire. Genius it has I think; but of the inferior water. The book is diffuse. It is brackish. It is pretentious. It is underbred, not only in the obvious sense, but in the literary sense. A first rate writer, I mean, respects writing too much to be tricky; startling; doing stunts. I’m reminded all the time of some callow school boy, say like Henry Lamb, full of wits & powers, but so self-conscious & egotistical that he loses his head, becomes extravagant, mannered, uproarious, ill at ease, makes kindly people feel sorry for him, & stern ones merely annoyed . . .

Woolf’s own writing could be described as self-conscious and mannered, and based on the diary entries Jackson quotes, she had no business calling anyone else egotistical.

Of all the writers profiled in the book, the one who most contrasts with his current reputation is Ernest Hemingway. In 1922 he was traveling around Europe as a war correspondent, enduring hardship and sometimes risking his life. He already had a great eye for detail. Covering British Prime Minister David Lloyd George at a conference in Genoa, Hemingway ends his article by describing how Lloyd George signed a sketch of him drawn by an Italian boy:

I looked at the sketch. It wasn’t bad. But it wasn’t Lloyd George. The only thing that was alive in it was the sprawled-out signature, gallant, healthy, swashbuckling, careless and masterful, done in a moment and done for all time, it stood out among the dead lines of the sketch—it was Lloyd George.

Five consecutive adjectives in a Hemingway sentence! But this was the year he came under the influence of Gertrude Stein, and while his style grew more distinctive, it’s a shame that he lost the fluidity and exuberance of his early writing.

Hemingway was also notably clear-sighted in his rejection of fascism, unlike a number of famous writers of the period. I wish Jackson had explored more deeply the links between modernism and fascism. Most modernists were not right-wingers, but fascism and modernism shared a complex relationship with modernity; leading figures in both movements yearned for a purer time in the distant past but were wholly reliant on modern developments for their success. In Eliot’s case, attraction to Mussolini quickly yielded to Tory conservatism, but Pound, Louis-Ferdinand Céline, and Wyndham Lewis, among others, remained ardent fascists.

Like any movement, modernism was destined to fizzle out. The push toward ever more radical formal experimentation and the willful difficulty of modernist aesthetics could only become stale over time. But there is no questioning the enormous influence of the writers, artists, and musicians Jackson writes about. The tour he provides may not deepen your understanding very much, but at least you’ll have a good time, and you may want to come back for longer visits.