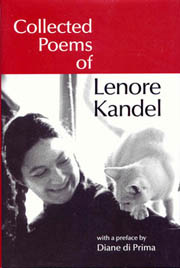 “Poetry is never compromise” says Lenore Kandel in the Introduction to her second collection of poems, 1967’sWord Alchemy. Don’t doubt her sincerity. Kandel’s poems display her dedication to keeping her writing as honest and straightforward as the lifestyle she pursued. Sex runs throughout the poems in this new Collected, side-by-side with a spiritual and meditative outlook based upon a firm belief in telling things straight.

Less than a decade after the obscenity trial over Allen Ginsberg’s Howl, Kandel’s The Love Book was forced through a similar rigmarole of legal wrangling over whether it should be considered obscene. In The Love Book and elsewhere, Kandel delights in innumerable ways the ecstatic joys of sex. Her poem “To Fuck with Love”—“To fuck with love / to love with all the heat and wild of fuck / the fever of your mouth devouring all my secrets and my alibis”—makes it clear this is a transcendent joy; she closesThe Love Book with the line “I see our bodies glow.”

Kandel’s poetry is accurately alchemical in that she pursues description of how, through our bodies, we might discover an ethereally heightened sense well beyond our own ken of self. And this discovery should ideally come, as Diane di Prima says in her Preface to this volume, “Without hesitance or guilt: the Road we knew led only from Vision to further Vision.”

While Kandel’s poetry defies easy categorization, her associations help define her: she dated Beat poet Lew Welch, who is evoked in her poem “my love the fisherman comes back smelling of salt dying,” written during the period Welch worked in the waters off San Francisco:

they eat the fish—and so
he shoots them with a .22
sighting among the green waves

Their relationship ended in tears, as Welch described in an interview with David Meltzer, but during their time together Kandel hung around many of the Beats and even appears as the character Romana Swartz in Jack Kerouac’s Big Sur. Later she was involved in the bohemian activities of the Diggers and took a Hell’s Angel, “Sweet William,” as her lover. Di Prima describes “a cavalcade of motorcycles” as her escort to the airport when she left San Francisco.

The majority of Kandel’s poems were written from the late 1950s to the early 1970s. There are some early chapbooks and also a short story included here as well as poems extending up through later decades (one on the passing of Gregory Corso in 2001 is especially notable), but it appears Kandel’s attention was elsewhere as she moved on in life. Nonetheless, what is preserved here is a more than generous offering—a testament to a remarkable imagination and deep spirit grounded in hard realities of the time.