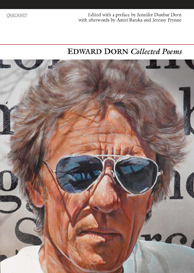 While on the surface the varying period works of poet Edward Dorn (1929-1999) appear vastly different, a tone in Dorn’s work marks it as recognizably his throughout his career. This tone is marked by fierce intelligence, grace, and speed, and can easily be mistaken as haughtiness, which it is not. It is rather the tone of someone intensely in love with a world that consistently dissatisfies, and it is particularly the human universe, as Dorn’s teacher Charles Olson might have it, that proves itself to be wanting. The world is heartbreaking, and one’s reaction to that can affect a person in many ways. Dorn’s work is an act of signifying a desire for love when a signified is gone, has left the world. This very largeCollected Poems—the most comprehensive gathering of Dorn’s work to date, put together with great skill and care by Jennifer Dunbar Dorn—allows us to see Dorn’s heartbreak in all its intensity, and the price of our vision is to feel with him a concomitant loss and pain.

Early on, in “The Rick of Green Wood,” we see Dorn greet a man, Burlingame, as another who occupies and works the land:

My name is Burlingame
said the woodcutter.
My name is Dorn, I said.
I buzz on Friday if the weather cools
said Burlingame, enough of names.

An easy trust here, a connection, as people do what is needed, and act directly and honestly, in a human community. Meaning, signification, surrounds us, and names or signifiers are not essential.

Not many years later, in what is generally taken as one of Dorn’s finest and most Olsonian early poems, “Idaho Out,” Dorn expresses a different view of the human landscape. The epigraph to the poem is from the geographer Carl Sauer: “The thing to be known is the natural landscape. It becomes known through the totality of its forms.” Sauer was a pioneer in geography, and part of his contribution was to include the human landscape along with the study of landforms over time. Dorn’s particular reading of the human/cultural landscape is one of harsh realism, close to scorn:

they jealously
keep that form and turn the sides
of the citizens’ hills into square documents
of their timid endeavor. The only
hard thing they had was first massacre
and then brickwork
not propaedeutic to a life of grand design
wherein all men fit

“Propadeutic,” from the Greek, literally means “to teach beforehand,” to provide preliminary instruction. Yet what may be taught does not usher in a signification of value. In massacring native peoples, and in their “brickwork” or turning “the sides / of the citizens’ hills into square documents / of their timid endeavor,” the American movement westward—here specifically the movement of Mormons that would result in Salt Lake City—has perverted any possibility of “a life of grand design / wherein all men fit.” The obfuscation, or even reversion, of a signification, has occurred through the acts of the “white flour makers” who have inscribed themselves over and onto the landscape, erasing traces of what that landscape, and its more original inhabitants, might have meant. In diction and in the weight of the matter, Dorn shows, in this early poem, that the Olsonian hope for a postmodernism that unites humanity with nature is neither historically accurate nor a real possibility. Olson wrote that he “stood estranged from that with which [he was] most familiar,” whereas Dorn is ashamed, with good reason, of that with which he is most familiar.

Dorn’s vision is not always so dark. At times he fights through and achieves a vision of glory, peace, or love, and we believe him, and desire to believe him, because we know that he owns no rose-colored glasses. Because he so wants to love, love being the ability of desire to signify and result in value and fruition, his depths of darkness are all the more convincing. Let us look at love, and at the search for beauty, when beauty is all around us—as in “Daffodil song,” where one might find, in the horns of yellow on the plain, a “twist on the air / of their brilliance,” and be led to ask, “Say where / say where I will find / a love” of similar “fortune.” Here lives a desire for love so demanding that such a fine result would seem impossible, yet in the tenth of “Twenty-four Love Songs” we hear,

Yet love, and by extension beauty, can not long last in the world in which we live, because its fire is beyond sense, a beautiful agony that cannot live in a “world [that] is shit / and I mean all of it.”

In the middle of Dorn’s work, and occupying the middle two hundred pages of this marvelous Collected Poems, is the complete long poem Gunslinger. In the whole of Dorn’s work, Gunslinger is a graceful, eloquent, sometimes messy, sometimes troubling, always energetic hinge. Robert Duncan once called it The Canterbury Tales of our time, yet it is not a grouping of diverse stories and characters on pilgrimage. Rather it tells a tale of a company that includes a stand-in for a reader, named “I,” and also includes a SemiDios of vision, courage, and great disappointment in the world, the title character. “I” in the poem dies, at least temporarily, yet revives after being preserved in a batch of LSD that has entered the poem as one of the belongings of the character Kool Everything. The central company of the poem also includes tavern-keeper Lil, the Poet, and the talking horse, Claude Levi-Strauss. These characters, led by the Slinger, are headed to Las Vegas in pursuit of Howard Hughes, who is not so much a character as a cypher, one who represents all the excesses of capitalism and greed in America—and one who is finally impossible to locate, who is the death of signification. “Vegas is a vast decoy,” the poem tells us, and this statement works in two ways. In one sense, Las Vegas is a symbol for all cheap pleasures that might divert us from meaningful, self-reliant lives, and might distract us from our own and the world’s troubles, which during the time of the writing of the poem included, significantly, the Vietnam War and protests; in another, whatever might truly be responsible for such distractions, and for the absolute greed that seems largely responsible for the mess in which America finds itself, simply can not be found. We have the decoy, but not the devil. At the end of the poem the characters disperse (one might say that signification disperses), but Hughes has not been beaten; he has also simply dispersed. The poem becomes a quest that can’t be completed, a battle that can’t be fought, a solution that can’t be found, a whole that never quite coheres—and that is its triumph, and why it may be the first postmodern epic poem, having given us “such fine play” in a journey of “this marvellous accidentalism.” Along the way, it is a darkly comic ride unlike any, which is perhaps why it has not quite found its place in the American canon; i.e., the readership has yet to catch up with its singularity. When that happens, I believe Gunslinger, and Dorn’s work in general, will be regarded as one of the great bodies of poetry of our time.

If Gunslinger is a hinge, the door swings open to a space of sharp epigrammatic wit pointed at the flaws of the world, including those of business, academia, poetry, comfortable lifestyles, hedonistic individualism, politics, and much more. Dorn has given in, in a sense, to what was barely kept at bay in the early poems, and what exploded the company of humanity inGunslinger: a knowledge of evil and the way it lives in all the little falsehoods, indiscretions, and blinders that are all too prevalent. Yet even here one finds humor, such as in Yellow Lola’s “Public Notice”:

A reader must notice that the speaker here could be anyone. We are all implicated, including the author.

Through Yellow Lola, Hello La Jolla, Captain Jack’s Chaps, and Abhorrences, this arch, wit-filled tone of condemnation dominates the poetry. Many will not embrace it, as it’s a poetic practice not often seen, though it has a strong pedigree, from the Latin Martial to Jonathan Swift, and is even present in some of the near-epigrammatic wit of Charles Bernstein. In Dorn’s later work it is often unrelenting, meant to make us uncomfortable, and possibly prod us to take action or at least examine our lifestyles, our institutions, and ourselves. Sometimes, as in this moment from Captain Jack’s Chaps or Houston/MLA, Dorn manages to locate the human somewhere between gods and animals, expressing a call to our higher possibilities.

GOD CREATES MAN!
Being a Response, When Our Way is Blocked by a Main Street Proselytizer Short of the Bayou and the Houston Harley, as Tractarians Blow Like Smoke and Cinders Along the Walk, and the Whole Situation is Full of Philosophical and Linguistic Danger

There’s no problem with
“God created Man.”
Of course He did!
He just created
a lot of monkeys first,
for practice.

But anyway,
that’s all rather vague:
to be exact, Odin
created Man,
as well as poetry
and he wore a hat
and carried a staff
and he was a traveller,
like Mercury.

Not all will love this later poetry by Dorn, as its intensity burns at the same time that its offhandedness conceals a deep caring. Some will even mistake it for hate. I think, rather, the desire for love is a kind of signifier, yet the signified is missing or blurred. What might give joy to existence is rarely if ever encountered.

The very late poems of Dorn continue this satiric tone, but also connect it to a tradition of heresy (in Languedoc Variorum), and use it to explore the devastations of cancer in Chemo Sabé, which ends with a note of prayer for the immense need “of the trembling earth,” in the face of which one cancer sufferer’s “singularity” may not be cause enough to solicit relief. Dorn, in this late poem, invokes the notion of life’s continuity beyond a single life cycle (possibly the signified that has been missing): “the White Rose, whose / house is light against the / threatening darkness.”

In these Collected Poems, Edward Dorn offers us much beauty in the breakdown of our lives, humanity, and even our bodies, and brings great intelligence to bear in his act of love of humankind and the earth. He is utterly convincing in an outlook that is often nearly unbearable. His work will break your heart—even as you need and love what it gives you.