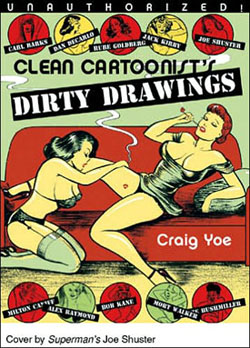 In his monumentally hefty collection and commentary No Laughing Matter: Rationale of the Dirty Joke, Gershon Legman noted that sex humor is hardly ever about sex, so much as dishing out degradation. But a large handful of the jokes he collected strike me as quite good, usually because they dole out wholly justified revenge by women against men (impotence jokes, small penis jokes, etc.), or because they treat satisfying and unharmful behavior as perfectly fine (so long as no one is hurt or really humiliated, anything goes). The humor is found in the foolishness of sexual embarrassment about ourselves. 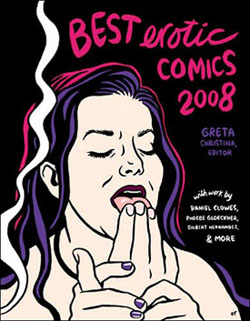 Still, the seriousness of the work in Best Erotic Comicslies in vivid contrast to Clean Cartoonists' Dirty Drawings. Anthologist and editor Craig Yoe, a former manager of the Muppets, is a sort of modern Legman, a collector of visual impressions and a compulsive filer-away of odd art. Here he has gathered dozens of naughty pieces by well-known comics artists and cartoonists, mostly from the 1920s-60s, many hitherto unpublished. As Yoe notes, mainstream cartoonists from Rube Goldberg to Charles Schultz—including Carl Barks, Will Eisner, Mort Walker, Hal Foster, Hank Ketcham, Chuck Jones, Al Capp, Jack Cole, Jim Steranko and Roy Crane—repressed their quiet urges to draw hot stuff in their funny papers and comic books. Only a few, like Don DeCarlo, did it for a living, and even then the ladies kept some of their clothes on.

When seen as a group, unfortunately, a lot of the women depicted here look too much alike—tall, busty and brazen—although it’s nice to see Brenda Starr naked, something her artist (Dale Messick) wanted to do for a long time. Worse, too few of these artists are women and even fewer nonwhite, but in the mainstream, these categories were small until very recent times. The important thing is that their art is, in most cases, exemplified their individual styles—none of these artists are imitating someone else's idea of nakedness. Clean Cartoonists' Dirty Drawings thereby helps make sense of what has been missing from the mainstream all along. 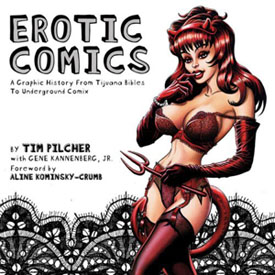 But this would be a conclusion that the authors of Erotic Comics are not at all likely to share. In one sense, the book is an updated version of Maurice Horn's Sex in the Comics, published in the more innocent (or censored) year of 1985. Both versions are global, with heavy influences of the French (naturally); apart from graphic updates, the new volume includes S&M material that Horn and his publishers were probably too fearful to handle. Thus, the often unclothed ’60s heroine Phoebe Zeit-geist, who originally appeared in the Beat-oriented pages of the Evergreen Review, seems tame when compared to an entire section of “Bondage Babes.” It's all out in the open, and though the authors add helpful commentary, mainly biographies of the artists, the ordinary reader is not likely to pay much attention to it.