Chinese poetry first hit home for me with poet Joel Oppenheimer’s recounting of the mythic tale regarding poet Li Po’s (701-762) accidental drowning after a festive night of solitary wine drinking. As Oppenheimer puts it: “one night on the way home from a wine tavern, he decided finally to make it with the moon and he sat down at the edge of the river, left it under a rock with his clothes and dove in to screw the moon, literally, the reflection in the water, and drowned.” I was enthralled by the lush Romantic grandeur of such an act—talk about a dedication to a poetry of the Real! As Oppenheimer says, “you have to love, you know, a guy like that.”

I picked up a Selected Poems of Li Po and avidly read away, paying especially close attention to any mention of the moon and wine—of which, not surprisingly, there were several. At the time, a doomed lunar love affair sounded awfully tempting. However, as my reading broadened in both depth and scope over ensuing decades, I developed a more intensive appreciation for all that Chinese poetry offers. My admiration has been reignited and further enriched by two recent New York Review Books reissues of contemporary classic collections under their Calligrams imprint, François Cheng’s Chinese Poetic Writing, translated by Donald A. Riggs and Jerome P. Seaton (1982), and David Hawkes’s A Little Primer of Tu Fu (1967). 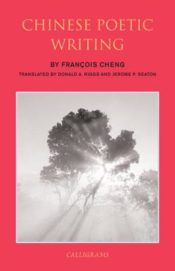 Several poems of Li Po appear in Chinese Poetic Writing, where he’s acknowledged by the non-Romanized version of his name, Li Bai; he’s also a dedicatee of several poems by Du Fu (Tu Fu) which appear as well in A Little Primer of Tu Fu. The two poets were friends, the slightly older Li Po serving as mentor to Tu Fu, who frets over his elder’s well-being in two poems, “Dreaming of Li Po” and “Thoughts of Li Po at World’s End.” This leads Hawkes to remark: “In view of the obsessive preoccupation with water and drowning found in all of these three poems about Li Po, it seems to me very likely that a rumour had reached Tu Fu in Ch’in-chou that Li Po had been drowned while on his way to exile.” As with so many details related to ancient Chinese poetry, this is mere conjecture, however like all of Hawkes’s interjections it is one worth bearing in mind as perhaps the earliest occurrence of the many precursors to the mythic tale of the famous poet’s fate.

Hawkes’ stated intention is “to give some idea of what Chinese poetry is really like and how it works,” no matter whether readers “know no Chinese at all or know only a little.” Indeed, approached together these two titles offer an inviting nuts-and-bolts introduction. Every Anglophone reader interested in the working mechanics behind Chinese poetry will find these texts to be endless resources worth returning to again and again. The books take independent yet complimentary approaches, overlapping at times while never quite duplicating information regarding similar material.

Chinese Poetic Writing offers a richly informative look at the ordering principles implicit in Chinese language and thought. After an opening essay breaking down the component pieces of Chinese poetry under three separate headings—Passive Procedures, Active Procedures, and The Images—Cheng gives us an anthology of T’ang Poetry (600-900, generally acclaimed as the greatest era of Chinese poetry), including nearly three dozen poets with their works separated out into the four classic styles of Chinese poetry forms: Quatrains, Regulated verses, Ancient-style, and Lyric. The poems are presented in Chinese characters accompanied by English verse translations. 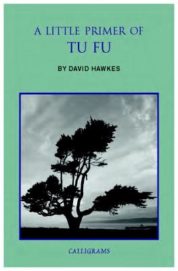 A Little Primer of Tu Fu offers thirty-five poems by the poet. In a short introductory note Hawkes explains his reasoning behind key decisions regarding the selection of poems (he relied entirely upon Tu Fu’s representation in Three Hundred T’ang Poems, “the gateway through which generations of Chinese schoolboys were initiated into the pleasures of poetry”) and his use of Modern Chinese (Mandarin) for transliteration of individual lines and Pin-yin for spelling (Mandarin is the form of Chinese recognized by the majority of modern-day native speakers and Pin-yin is both easiest and most ‘official’ standard system in use today). Each poem is first presented in Chinese characters with the Mandarin transliteration interfiled line-by-line. This is followed by four separate explanatory descriptions of the poem’s 1) Title and Subject and 2) Form. Then comes 3) Exegesis, giving word-by-word direct translation from Mandarin into English, as well as additional commentary on occasion. Finally, there is 4) a prose translation of the original poem into English by Hawkes.

Cheng’s opening essay thoroughly demonstrates how a Chinese poem’s images and descriptive phrases mirror or parallel each other in order to achieve a patterned balance between individual lines. On a drastically simplified level, this is a reflection of yin-yang theory: if there is “moon” then there is also “sun” and the presentation of the two achieves a balance which reflects the universe of daily appearance. This provides a broad understanding of the overall patterns governing a poem’s composition. Hawkes also points out such patterning in a more condensed manner, as in his exegesis of the Tu Fu couplet “Fragrant mist cloud-hair wet / Clear light jade-arms cold”: “Notice the parallelism in this couplet: ‘fragrant mist’ parallels ‘clear light’, ‘cloud-hair’ parallels ‘jade-arms’, and ‘wet’ parallels ‘cold’.” This paralleling has obvious effects upon translation. Compare the same couplet as found in Chinese Poetic Writing: “Fragrant mist, moist cloud of your hair. / In that clear light, your arm jade cool.” Moving between the two texts to seek out such comparisons is but one example of how these works unlock a scintillating, rich toolbox for any working poet.

Cheng additionally explores the inherent Chinese “link between poetry and cosmology,” laying out a clear argument “that the Chinese poetic language, in its structure, embodies the very laws which rule cosmology as it was conceived of in Chinese thought.” Zhong Hong’s poetic treatise Shi Pin is enticingly cited: “song is a light which illuminates the Three Spirits (Man-Earth-Heaven) as well as the ten thousand creatures. Thus, it constitutes an offering to the spirits, and makes manifest the hidden mystery. For upsetting Heaven and Earth, for moving the Gods, nothing equals poetry.” This mounts a strong argument for just how inseparably entwined poetry and spirituality are for the Chinese, representing a holism between poet-text-world that is embedded directly into the language: “To suppress the gratuitous and arbitrary at all levels of the system, a semiotic system founded upon an intimate relationship with the real, so that there is no rupture between signs and the world, and hence none between man and the universe: such would be the constant direction of the Chinese.”

Although aimed as being introductory in nature, both A Little Primer of Tu Fu and Chinese Poetic Writing nonetheless forefront the presentation of the poem in Chinese characters, clearly emphasizing the importance of the original language in fully understanding any poetry. Cheng goes so far as presenting a few poems without attempting any translation at all, although individual elements of these poems are utilized in his essay as examples of Chinese poetic devices. This is an exciting challenge to our Anglo-centric culture; the Anglo-prone reader is forced to step beyond the comfort of isolation within their own language. Hawkes also expresses the wish “to have given the reader a gramophone record of the sounds” and encourages that one finds “a Chinese speaker who will make the noises for him.” This is sage advice. Bill Porter, aka Red Pine, recently recited some Chinese poems at a memorial reading for the late Joanne Kyger and the sound was like a mellow creek crisply tinkling its way over and through small rocks—an incredible music full of human emotion.