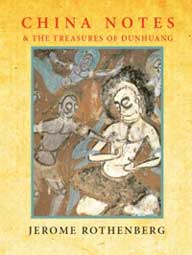 In his monumental essay "Paz in Asia," Eliot Weinberger chronicles the great modernist poets and translators who never went to Asia—Ezra Pound, Arthur Waley, Bertolt Brecht—and those who did—Victor Segalen, Kenneth Rexroth, and of course Octavio Paz. While the number of western poets who have been infatuated with or otherwise drawn from Asian culture in their poetry is ultimately incalculable, a continuation of that essay written today would have to include "the ultimate 'hyphenated' poet," as Charles Bernstein has called him, "critic-anthropologist-editor-anthologist-performer-teacher-translator," Jerome Rothenberg.

In China Notes & the Treasures of Dunhuang, the Deep Imagist ethnopoet and editor of Shaking the Pumpkin and Poems for the Millennium has published a slim book of poems written in the face of a trip throughout China. Originally two separate publications, the poems present a China at once more real than that imagined by, say, Pound's restrained translations or his historical polemics, and yet very aware of their own exoticism of a historical and geographical subject. In "Beijing: Tibetan Temple," for instance, Rothenberg gives us:

the buddha
in the lama temple,
carved from a single
trunk of sandalwood,
reaches for the roof

an old monk
at the door,
in red,
looks like the oldest
man on earth

Or in "A Closing Note," the final poem of China Notes,

"making our way through China
"like fabled poets of the past,

"we stop to muse upon
"the dead & living,

Despite, or perhaps adding to, Rothenberg's conscious presentation of a poetic China distinct from his forebears, the specter of Ezra Pound shows up on practically every page (the Wai-Lim in the above poem is Rothenberg's travel companion, translator, poet, and author of the seminal Ezra Pound's Cathay). Rothenberg even seems to try to make up—or at least account—for Pound's fascism, writing through Japan's holocaust of Chinese citizens in "The Nanking Massacre," with lines such as these:

While "The Nanking Massacre" presents a particularly horrendous version of what often gets called "cross-cultural relations," many of Rothenberg's poems also strike at the international hybrid nature beneath China's monolithic cultural image. The cover, for instance, shows a picture of two buddhas, one Indian and one Chinese, transmitting wisdom. The image comes from the grottoes of Dunhuang, a northwestern Chinese desert city that was once an international center of trade both commercial and religious. In the second section of his book, Rothenberg writes a poetry for this ancient city, now a remote tourist destination for its medieval caves painted with Buddhist iconography that has remained vivid over the centuries. Through repetition, his poems seem to point not only to China's interplay with India, but also to the American poetics of Allen Ginsberg, such as in this section from "Treasures of Dunhuang (3)":

If this mantric methodology works best when read aloud (a reading is viewable on YouTube), other sections reveal a more accessible transcendence:

three rabbits
at the center of
a lotus

chase each other
touch & form
a triangle

around which
dancing angels
fly & point

In the end, Rothenberg's China is not the China of urban sprawl, pollution, cheap fakes, and corruption we read about in the papers, nor is it the nationalist argument of development, Great Wall souvenirs, and five-star hotels familiar to casual visitors to China, nor is it the mystical myth of mist-enshrouded mountains and pithy poets from earlier translations. Instead, Rothenberg pushes the western poetic appreciation of China further into the future, cutting through the earlier myth-makings of China while creating a new one, where China is polyvalent, vivid, and above all, a vortex.