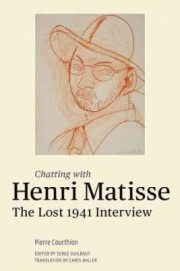 Nearing what proved the last decade of his life Henri Matisse granted a series of interviews to Swiss art critic Pierre Courthion. At the time, as Matisse was recuperating from the latest of many surgeries, it seemed quite possibly to be the end of his life, so when approached by Courthion he embraced the opportunity to set down these breezy reflections. Matisse obviously wished his words to have an unstudied appearance yet also retain a sagely weight. He speaks freely of his life and times, focusing on his own personal artistic development with little to say regarding broader historical events of the period.

Though noted as "the lost 1941 interview," the manuscript has for years been located among Courthion's papers at the Getty Institute, readily available to Matisse scholars who have drawn upon it for their research. The manuscript’s backstory is as fascinating a tale as the interview itself. As is revealed in the introduction, critical essays, after-the-fact correspondence, and several pages of material cut from the manuscript, the critic and the artist were at odds when it came to their conception of the project and final product.

Courthion prioritizes the setting of the scene. He gives short introductions before each of the nine interviews. He interjects asides, describes Matisse's general outward disposition, and notes significant bodily adjustments made by Matisse during the conversation. He also preferred the idea of grouping the remarks according to common themes, rather than a strictly adhered transcript of what was said. Matisse, on the other hand, wished to exclude remarks which might personally offend acquaintances and sought to clarify any murky references and correct his mistaken recollections where needed. They ended up meeting each other somewhere in the middle.

Matisse's ultimate decision against publication seems mostly due to his sense of the interview simply having been dragged out longer than was necessary. The urgency with which he had at first accepted the project dissipated as his health continued to stabilize into his final years of life. Yet combined with the story of the manuscript going through multiple drafts as it travelled back and forth between Matisse and Courthion as they readied it for the ultimately stalled publication, the interview makes for a perfect art-house film melodrama. While the title of "Chatting" doesn't have the same abrupt elegance to the ear as the French "bavardages" (or the rough quality of Matisse's rejected descriptor "radotages," which would be rendered into English as "ramblings"), it does convey the casually embraced nature of these exchanges. This is Matisse on Matisse, from the hip.