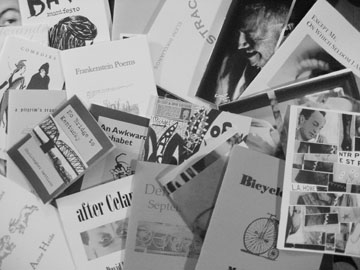 The year 2008 saw the ubiquity of two not so mutually exclusive terms: maverick and change. While the implication of the latter more thoroughly captured the public’s attention, the former is indeed an integral component to its success. Charles Olson’s famous opening to "The Kingfishers" seems as relevant as ever: “What does not change / is the will to change.” Such a will requires at the very least a modicum of the maverick spirit. While we were busy taking in the requisite reductive rhetoric of the campaign season, poetry chapbook culture quietly continued to grind its maverick gears, churning out numerous works that both map and facilitate change in the art form. In an effort to honor the numerous contributions to the growing community of chapbook publishers, Rain Taxi offers this year-end recap, a small sampling of some of the most active and interesting goings-on in the world of the chapbook.

Each of the six chapbooks recently released by Faux Press displays a photograph of the author bisected by strips of color, along with a signature, lending a twist to the distance with which most of these poets approach expressive subjectivity. Available as a set, the run includes Stacy Szymaszek’s Orizaba: A Voyage with Hart Crane, C. A. Conrad’s (Soma)tic Midge, Alan Davies’s Odes, Jeni Olin’s The Pill Book, Brenda Iijima's Subsistence Equipment, and Jack Kimball’s Pathologies. Transmission Press published a handful of chapbooks by younger practitioners already making a name for themselves: Michael Slosek's Interdiction, Aaron Lowinger's Open Night, Dorothea Lasky’s Tourmaline, and John Sakkis’s The Moveable Ones. Ypolita Press recently published a pair of exceptional chapbooks: Gina Myers’s Behind the R and Barbara Jane Reyes’s Easter Sunday. Bonfire Press used their Vandercook SP15 letterpress and photopolymer plates to create Eleni Sikelianos’s The Abstracted Heart of Hours & Days, one of the year’s most beautiful chapbooks.

Counterpath Press blurred the line between chapbook and trade edition with the release of the perfect-bound, 31-page collection Autobiography/Oughtabiography by Anthony Hawley. New Michigan Press followed suit with two 40-plus-page, perfect-bound chapbooks: Marc McKee’s What Apocalypse? and Rachel Moritz’s Night-Sea. The Cupboard, launching their quarterly pamphlet series dedicated to prose, published Jesse Ball’s Parables & Lies, whose near 70 pages of Baudelairean, Kafkaesque narrative allegories and absurdist fiction are everywhere on the cusp of bursting from the confines of the chapbook as we know it. Texture Press released Edward Foster’s A History of the Common Scale, another of this year’s perfect-bound chapbooks. Toadlily Press published a perfect-bound, trade edition book called An Uncommon Accord: Poems, which collects under one cover chapbooks by George Kraus, Marcia Arrieta, Pat Landreth Keller, and Michael Carman.

Noemi Press continued their line of solid titles, including both poetry and fiction, with the release of Camera Obscura by Rebecca Bednarz, The Evening Papers by Matthew Kirby, Closed Histories by Sara Veglahn, and David Galef’s A Man of Ideas and Other Stories. Buffalo’s Sunnyoutside brought Michael Kriesel’s beautifully produced Moths Mail the House into the world, while Cincinnati’s Cy Press added Anselm Berrigan’s stunning Have A Good One to the conversation. Allison Carter’s Shadows are Weather and Emily Abendroth’s Toward Eadward Forward were published by Horse Less Press. House Press continued their tradition of gorgeous, necessary work with the release of Dana Ward’s Goodnight Voice and Roberto Harrison’s Reflector. Teppichfresser Press brought out Karl Saffran’s hilarious though elegiac Dead Wrestler Sonnets. Fastened with industrial-sized nuts and bolts, G. C. Waldrep’s One Way No Exit, published by Tarpaulin Sky Press, must have done some damage à la Debord’s sandpapered Mémoires to neighboring titles on chapbook collectors' shelves.

Kitchen Press launched several exciting titles: Joseph Massey’s Out of Light, Thomas David Lisk’s Tentative List (A), Jon Leon’s Hit Wave, and Mathias Svalina’s Why I Am White. Anyone passing through Boise was bound to pick up a copy or two of Martin Corless-Smith’s Free Poetry series of chapbooks, including Johann Heinrich Pestalozzi’s The Evening Hours of a Hermit, Paul Hoover’s The Windows (The Actual Acts), and Sally Keith’s On the Painting of the View. Mitzvah Chaps debuted with the release of three remarkable chapbooks: Chuck Stebelton’s A Maximal Object, Anne Boyer’s Art is War, and Mike Hauser’s Psychic Headset. Octopus Books published Matthew Rohrer’s They All Seemed Asleep. Adam Clay’s As Complete as a Thought Can Be was recently released on Cannibal Books.

Continuing their series of high-quality chapbooks pitched toward a centrist aesthetic, the University of Wisconsin-Madison Libraries' ongoing chapbook imprint, Parallel Press, published Austin Smith’s In the Silence of the Migrated Birds, Lisa Marie Brodsky’s We Nod Our Dark Heads, and Carl Lindner’s The Choreographer of Raindrops. Finishing Line Press continued their voluminous output, including the noteworthy collections Faith by Susie Meserve, Savage Machinery by Karen Rigby, and Lesley Wheeler’s Scholarship Girl. The Poetry Society of America’s annual Chapbook Fellowship brought out Dream of Water by Kate Ingold, Dear Wild Abandon by Andrew Michael Roberts, The Original Instructions for the Perfect Preservation of Birds &c. by Carey McHugh, and Monster Theory by Lytton Smith.

Feeling overwhelmed yet? Fret not. The scarcity of the chapbook is one of its key delights. Of course, the sheer abundance of chapbooks published each year prevents anyone from having a complete handle on the scene, but the truth is there is no handle, no single scene; we’re faced with micro-communities that constellate around particular aesthetics and social ties. This is postmodern pluralism at its height—the prismatic way a fly sees the world. Buzz! Buzz! Happy New Year.