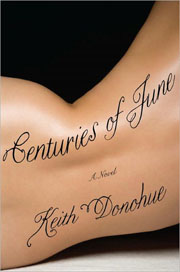 In the opening scene of Keith Donohue's novel Centuries of June, we see the bloody collision of the narrator’s head against the bathroom floor. "In that instant," Jack says, "the blood became a secondary concern to the hole in the back of my head." When Jack rises from the bathroom floor, his head wound already healing, he returns to his bedroom to find eight unfamiliar women in his bed, any of whom may have delivered the knock to his noggin. To help sort out this mystery, a man appears who may or may not be Jack's long-departed father, though he also bears a likeness to playwright Samuel Beckett.

With every clock in the house stopped at the same early-morning moment, Jack wanders through a bemused fog, struggling to remember how he came to his present predicament. In between stretches of clock checking, Jack repairs to the bathroom, where he is visited one-by-one by the women in his bed. Each of them, ravishing and ravaging, harbors an ancient grudge against Jack, who is unable, we are reminded more than once, to remember who each is or how she arrived in his bed.

To jog his memory, each woman takes her turn recounting her history, and here Donohue's novel exults in languorous sensuality. The recursive mystery of Jack's death recedes before the brazenness of each woman's story. Bawdy and erudite, their tales range deep into history and swirl with sorcery. Dolly, a pre-Columbian Tlingit girl, marries a shape-shifting bear; Alice, a housewife in colonial Salem, may indeed practice the witchcraft she is accused of. Each tale is united by a plot of a wronged woman and a delight in the textural beauty of language. Long Lane Long's story of 17th-century Bermudan colonists scatters "tho"s and "whene'er"s wherever it can, and Flo Worth's tale of the California Gold Rush glisters with varmints and jackanapes.

In an important sense, then, Centuries of June is a romp, and though Jack stumbles through it addled with incomprehension, the humor of its suspended animation echoes indeed Beckett's dark comedy; likewise, the fanciful tales, happy violence, and sensuous, twining language recall the gaiety of Tristram Shandy's endless diversions, and that earlier novel's happy, delaying struggle with death's specter. Unfortunately, Jack seems too slow to keep up with the tales and their allusions. In each interlude between tales he wanders through his house, wondering the same questions about what time it must be, where the cat may have gone, and why, once more, did he find himself brained and dying on the bathroom floor?

Meanwhile, the eternal moment of Jack's morning exerts a captivating pull that trivializes the mere mystery of his death. With each tale through the centuries, the moment is stretched to its limits with infectious brio. Jack comes up with his own modest solution to the mystery, but by then it's too late for him to join us in treasuring the insistent, spellbinding tales of his visitors.