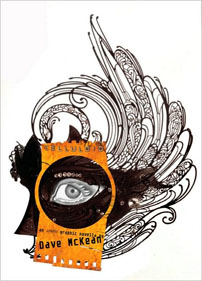 The difference between erotica and pornography, someone once said, is that the job of erotica is to turn the reader on, while pornography is designed to get them off. It’s a tricky game to play with someone you know, let alone an unknown reader; often times, one cracks open an erotic novel to find that the author has conceded to succeeding at half the job rather than risk failing at the full effort. To make a sincere effort at the former, though, requires a different style of storytelling. Seduction and nuance take precedent over engagement and detail; as with the other emotive genres of horror and comedy, erotica must appeal to the heart as much as to the mind.

In Dave McKean’s latest graphic novel, Celluloid, a woman arrives at her lover's apartment. Frustrated when he calls to tell her he's stuck at the office, she takes a bath, then while still naked, discovers a film projector sitting in his living room. Running the film on one of the apartment's bare walls, she discovers it to be a pornographic film of a woman in a carnival mask having sex. Though the movie captivates her, the film overheats and melts at its (and her) climax. Yet even though the film is broken, the camera projects the image of a door on the wall, which the woman opens and enters.

Celluloid is a return to traditional McKean graphic storytelling, in that it's not like anything he's done before. Known in comics primarily for his longtime association with writer Neil Gaiman, with whom he collaborated on the childhood memory-based graphic novels Violent Cases and Mr. Punch, and the serialized meditation on mortality and creation Signal to Noise, McKean's solo work includes the sweeping kitchen-sink-magical-realism graphic novel Cages and the short story collection Pictures That Tick. Along with Celluloid, these books explore human interactions, desires, and motivations through a variety of narratives and artistic styles.

Though clearly an erotic graphic novel, its mixed-media stylings and almost musical pacing put it a far distance from the elegant lust of Alan Moore and Melinda Gebbie's equally ambitious Lost Girls. Though both present stories driven forward by sex, Moore and Gebbie’s work is more of a baroque exegesis of sexuality, while Celluloid prefers to be more enigmatic and lingering. The woman's encounters are thorough in their surreality; in one scene a many-breasted woman with grapes for hair cavorts in Sapphic indulgence against a field of springtime green, and in another, a bright and leering devil with an almost Art Nouveau condition of priapism cavorts, glowing red with lust in the darkness.

Celluloid is a challenging work, not so much in how it is read, but in how it pushes at the boundaries of what we call a graphic novel and what we consider erotica. The wordless images McKean presents take up whole pages, sometimes two. Very few of the pages break into separate "panels," giving the book a consistent pacing. When he takes a sight and spreads it across two pages, it gives weight and resonance to the moment, drawing the note out. And the lack of dialogue or any narrative text leaves each visual to linger as long as the reader permits. It's a strong break from the conventional page layouts of well-crafted comic stories, which are generally composed to lead the reader’s eye and create the deception of time. It further challenges the designation of graphic “novel” in that the length and scope of the story is more akin to a short story of magical realism. Though visually it is a rich and nuanced work, as a narrative it lacks overt depth and complexity. The characters are never named, and the interpersonal relationship between The Woman and Her Lover is barely hinted at. (This being erotica, it’s easy to assume that the pair are lovers, but as the book is devoid of text save for the dust jacket flap, any number of possible relationships could be possible.)