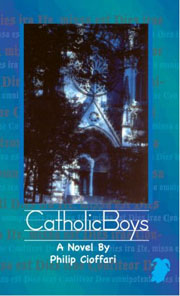 A book entitled Catholic Boys inevitably invites a few clichéd presumptions; innocent schoolboys, lustful priests, and the ensuing tensions and scandals are expected and delivered. In this debut novel, however, author Philip Cioffari retains a certain degree of inventiveness by focusing on his conflicted protagonist rather than the lives of the schoolboys themselves.

Alex Ramsey is a former police detective who lost his job shortly after his teenage son, Evan, was killed in a car crash. He now works as a security guard, where he encounters a case more complex than any assignment on the force. A young Catholic schoolboy named Arthur, roughly the age of Ramsey’s deceased son, is found beaten, raped, and hung from a tree near the apartment complex where he works. The former detective is soon entangled in a search for the elusive killer. Along the way, he unveils an intricate web of lies spun from some of the highest members of the church.

Most clues in this mystery are revealed as Ramsey himself uncovers the evidence. The reader, however, has a head start in the case. In his prologue, Cioffari wisely gives a brief glimpse into the events that transpired on the night of the murder. A gang of young, homophobic boys called the Brandos were with Arthur shortly before he died, beating and stripping him from his clothes. Although this mountain of circumstantial evidence steers the reader toward an obvious assailant, Ramsey, almost ignorantly, chooses a number of different paths for his investigation.

One path leads Ramsey into the arms of a young stripper named Krissie, the girlfriend of the Brando leader and, coincidentally, the woman responsible for his son’s death. Like all the characters in this novel, both Ramsey and Krissie have a morbid desire for forbidden things. They both have needs that can’t be filled by a mourning, drunken wife or a rabid, brutal boyfriend. But just like a priest choosing between desires of the flesh and a promise to the Lord, the choice to succumb to temptation isn’t easy. As Krissie states, “I had an ethics teacher, a priest at Fordham, who used to say all the choices we made were choices between evils of one kind or another. His definition of moral being was the man who consistently chose the lesser evil.”

At times, Coiffari’s choices feel more deliberate than those of his characters. Ramsey’s disregard for the most obvious assailant in the case is less about the experience of the former detective than an obvious diversionary tactic by the author; likewise, the interaction between Krissie and Ramsey is an overly contrived circumstance. Still, Coiffari’s language at times is the most forgiving, even if its lofty eloquence sometimes gets in the way of this swift and simple mystery.