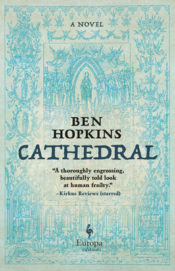 In F for Fake, his quasi-documentary about fraudulence in the art world, Orson Welles pauses in his descent into imposture to hold aloft Chartres Cathedral as perhaps the one true thing that our culture has created. It will be our legacy, he posits, and will “testify to what we had it in us to accomplish.” Cannily, Welles fails to mention that the Gothic grandeur of Chartres was also founded on an epic fraud, as its majestic marshalling of spiritual, artistic, economic, and political forces was based on the pretense that it housed the tunic Mary wore while birthing Jesus. Encompassing a labyrinth of these kinds of interconnected dreams and deceptions, screenwriter and filmmaker Ben Hopkins’s monumental debut novel, Cathedral, constructs an edifice whose design ranges from the most sublime heights of inspiration to the most degenerate political depths, all of them counterbalancing each other to maintain their intricate facades.

Hopkins begins the novel with a bit of Wellesian legerdemain, enticing the reader into believing that this will be a kind of pilgrimage into artistic and spiritual fulfillment, with stock characters to root for and expect to develop. The great trick is that the initial clichés are as enjoyable as they are blatantly dubious. There’s the visionary master builder who’s visited the newly constructed Gothic cathedrals of medieval France and been given charge of redesigning the cathedral of Hagenberg, a burgeoning city on the Rhine, in this soaring new style. There’s his callow disciple, who we expect to grow to self-realization and mastery over the long course of the building’s bildung. Then there’s the master builder’s outrageously idealized muse, an ethereal magician’s daughter whose beauty and purity stretch the reader’s credulity and patience. Countering these three is the Bishop’s treasurer, a Machiavellian schemer who holds the purse strings for the cathedral’s construction and has no problem manufacturing heretics to squash in order to plunder their loot. In a traditional novel of this sort, he would be the dark underside of the matter that the author portrays as important and true, but in Hopkins’s medieval world of realpolitik, he and his kind are the novel’s true matter.

Rapidly subverting the agony-and-ecstasy clichés we expect, Hopkins largely discards the idealistic cathedral theme and plunges the reader into brutally pragmatic political machinations, taking as much time and interest in teasing out the intricacies of the local clergy, nobles, merchants, and bureaucrats as he does in explicating the vast Papal and Imperial intrigues that keep the locals in constant adaptation and evolution. A truly Darwinian novel, Cathedral never remains static as its denizens build and rebuild the structures of their lives, both in competition and symbiosis with each other. Alliances and friendships arise and fall and rise again in new forms as they balance and rebalance, the characters’ anthill associations scattering and regathering like a sped-up version of the incessantly redrawn plans for the cathedral, which, despite everything, continues its ascent.

Readers looking for medieval literature’s cathedral-like summa aesthetics—and ever-ascending spiritual edge-play—may be disappointed by this novel’s ultimately ghostless machine. A great Gothic cathedral is like the cosmos, with its every section and subsection forming an ever-fractaling and ever-ornate atomic density. Visiting the lacy whorls of Strasbourg cathedral is like walking up to an enormous thumbprint that becomes more astoundingly elaborate with each step forward. Hopkins’s novel is nothing like this. His prose isn’t at all lapidary, but instead rapid and vigorous; you don’t pause on it in rapt wonder, but rather get swept along by its force. He has a powerful vocabulary, but his readers won’t get the easter-egg-hunt joy of searching the dictionary or internet five times a page to discover the names of clothes and carriage parts and architectural details that they’ll recognize from medieval paintings, as they do when reading something like Victor Hugo’s Notre-Dame de Paris. They also won’t find themselves immersed in a heady web of Scholastic theology, as in Henry Adams or Jorge Luis Borges or Umberto Eco. Hopkins’s master is history, not aesthetics or metaphysics.

As a screenwriter and filmmaker, Hopkins also employs far more filmic allusions than literary ones, such as stone facedly referencing Monty Python at two very unfunny moments and making a few glancing nods toward The Princess Bride, another work of a great screenwriter/novelist. Nicknaming his jejune stonecutter “Rettich” and placing great stress on the association with the word radish, Hopkins almost certainly invokes the celebrated Chartres scene in F for Fake, during which Welles mistily refers to the contemporary human as a “poor forked radish,” an allusion to Thomas Carlyle’s riff on Falstaff’s description of Robert Shallow in Henry IV, Part 2. That’s quite a thread of association from film to architecture to literature, and Hopkins dispenses with that thread on the novel’s first page. Otherwise largely literature free in its associative language and aesthetic order, this brilliantly imagined, gorgeously designed, and deeply profound novel is nonetheless a magnificent work of literature itself. It took Hopkins eight years to construct this extraordinary novel, and it will likely stand as his lasting legacy.