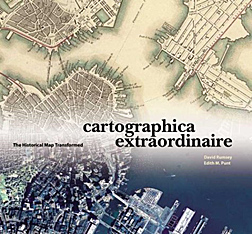 David Rumsey—not the sort to balk at career change—earned two degrees in Art History from Yale, fell into a small fortune buying and selling real estate in the San Francisco area, and went on to develop one of the most extensive collections of antique maps in the world. Eager to share his collections with others, Rumsey explored, and occasionally pioneered, the technology required to digitalize his maps and display them on the web for collectors, historians, and students of cartography. Cartographica Extraordinaire, a handsome volume almost fourteen inches square, provides a glimpse into the many treasures of the Rumsey Library for those of us who lack the time or the wherewithal to view these colorful and intriguing documents online, or to print them out on the scale they deserve. Along the way, Rumsey and co-author Edith M. Punt offer us a brief overview of the development of maps, and the continuing role they play in the modern world of geographic information systems (GIS).

To judge from the text of Cartographica Extraordinaire, Rumsey's appreciation of maps owes more to his feel for art than his grasp of history. While there are things to be learned on every page of the book about the relations between the development of cities, nations, and continents and the drawing of maps, Rumsey has made no attempt to chart the development of map-making techniques into the digital age—only two maps in the book were created more recently than 1922—and we learn little about the impact of satellites on mapping techniques, dramatic though they have been. Rumsey's interest lies primarily in the beauty and historical preciousness of individual maps, the development of lithographic techniques, the changing role of maps in "taking control" of a landscape, and the fascinating archaisms that old maps almost invariably contain.

Even in this regard we might occasionally wish for more astuteness than Rumsey provides. For example, on one two-page spread) we're given the opportunity to compare two maps of the Vancouver area, one published by George Vancouver himself in 1798, and the other by the Spaniard Espinosa y Tello in 1802. In the text Rumsey describes the controversy concerning who had the rights to America's northwest coast. In the caption to the Spanish map we read:

Vancouver's maps show the English obsession with taking and claiming land by mapping publicly its every detail—they almost saw maps as deeds. Espinosa's approach reflects Spain's view of maps as intellectual property to be hoarded, establishing land ownership by controlling the knowledge of where places were located.

Aside from the solecism of "mapping publicly," the underlying point is questionable in itself: Spain had already relinquished control of America's northwest coast to England in 1790, and Vancouver's map of 1798 was obviously superior in every way to Espinosa's edition of four years later—so the contrasting strategies of disseminating or hoarding knowledge has no relevance to either the control of the area depicted or the date of publication of either map. 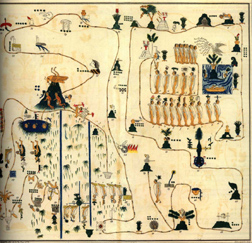 Yet the maps themselves remain beautiful to look at. And this sheer variety of eras, styles, and functions brings interest to almost every page of the book. We have exploratory maps, land grant maps, township plot maps, state county maps, relief maps. There is a wonderfully stylized map depicting the migration of the Aztec Indians from Aztlan to the Valley of Mexico which, beautiful though it is, looks more like a child's board game than a scientific depiction of anything. There are maps of rivers, arranged in long thin strips, maps of mail routes, train routes, urban grids. It's interesting to compare the quaint pages from a road atlas published in 1802, showing only a few miles of countryside at a time—but with what seems to be every creek and hill and tree depicted—to the scale and clutter of today's Rand McNally version.

Rumsey has focused his collecting effort on the Western hemisphere, and it's a little disappointing to see so few maps of South America included in the mix. On the other hand, the inordinate presence of the American West among Rumsey's selections may be justified on two counts: the terrain is spectacular, but challenging to render effectively on a flat surface; and the exploration and mapping of the American West played a crucial role in the development of both the area and the modern map. Readers may also be disappointed to find the detail of some of the early maps a bit muddy, but greater detail would presumably have required a narrower field of view, and there are plenty of "close-ups" to balance the beautiful but less than perfectly sharp full-map views occasionally exhibited here. Thus, despite its occasional shortcomings, Cartographica Extraordinaire is likely to bring genuine delight to all non-specialist map-lovers, travelers, and arm-chair historians.