Join us to hear the powerful story of a poet who
becomes an activist through a trial by fire. 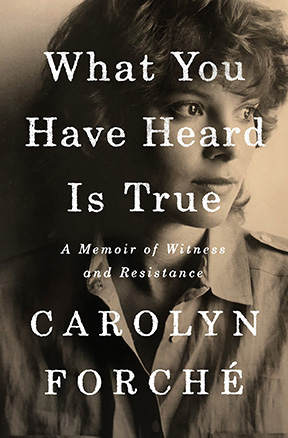 What You Have Heard is True is a devastating, lyrical, and visionary memoir about a young woman’s brave choice to engage with horror in order to help others. Written by one of the most gifted poets of her generation, this is the story of a woman’s radical act of empathy.

Carolyn Forché is twenty-seven when a mysterious stranger appears on her doorstep. She’s heard rumors about who he might be—a lone wolf, a communist, a CIA operative, a sharpshooter, a revolutionary, a small coffee farmer—but no one seems to know for certain. Captivated for reasons she doesn’t fully understand, she travels with him to El Salvador and becomes enmeshed in something beyond her comprehension. Together they meet with high-ranking military officers, impoverished farm workers, and clergy desperately trying to assist the poor and keep the peace. Pursued by death squads and sheltering in safe houses, the two forge a rich friendship, as Forché attempts to make sense of what she’s experiencing and establish a moral foothold amidst profound suffering. This is the powerful story of a poet’s experience in a country on the verge of war, and a journey toward social conscience in a perilous time.

“In this searing, vital memoir, Carolyn Forché at last reveals the dark stories behind her famous early poems: she brings alive the brutality, complexity and idealism of El Salvador in the late 1970s, a time of revolution that echoes all too painfully in the present. What You Have Heard Is True, a riveting and essential account of a young woman’s political and human awakening, is as beautiful as it is painful to read.”
—Claire Messud, author of The Burning Girl

“This luminous book stands beside the memoirs of Pablo Neruda and Czeslaw Milosz in its account of a poets education, the struggle of a great artist to be worthy of her gifts. Carolyn Forché's prose is shamanic: it sees both the surface of things and their inner workings, it animates the inanimate world.”
—Garth Greenwell, author of What Belongs to You

“Carolyn Forché asks us not only to hear, but to see, the scale of human and moral devastation in El Salvador. For those of us who are citizens and residents of the United States, Forché’s powerful, moving, and disturbing memoir also demands that we recognize our country’s responsibility for the atrocities committed by the El Salvadoran military. As is the case with her poetry, Forché’s nonfiction asserts the need for truth—in our politics, in our writing, in our witnessing.”
—Viet Thanh Nguyen, author of The Sympathizer

Carolyn Forché is an American poet, editor, translator, and activist. Her books of poetry are Blue Hour, The Angel of History, The Country Between Us, and Gathering the Tribes. In 2013, Forché received the Academy of American Poets Fellowship given for distinguished poetic achievement. In 2017, she became one of the first two poets to receive the Windham-Campbell Prize. She is a University Professor at Georgetown University. Forché lives in Maryland with her husband, the photographer Harry Mattison.