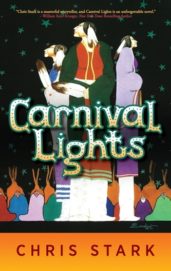 An impressive work about family, survival, and what one character calls the “spiral” of all stories, Chris Stark’s Carnival Lights is part novel, part Minnesota history, part spiritual tome, and part brutal account of white racial and sexual violence. Centering on several generations of one Ojibwe family in both the northern and southern parts of the state and spanning the years 1860 to 1969, the book deftly shows how whites used land theft, intimidation, and sheer force to try to exterminate and remove Native communities, but also how the victims resisted and fought to keep their ways of life.

Stark sets her main plot in 1969, as two teenage cousins, Sher and Kris, flee their home on the reservation to escape toxic family dynamics and rape, landing in Minneapolis. “The girls arrived in the city with $12 and two empty stomachs, their grandfather’s World War II pack, two stainless steel cups, some face makeup, gum, and a lighter.” The young Ojibwe women navigate the treacherous city streets as best they can, but it feels as if they are being hunted by sexual predators at every turn. Sher and Kris are seen as not people, but objects to be plundered, used up, and then cast aside. At the same time, in Virginia, Minnesota, their Aunt Em has been kidnapped by men who are selling her “upstream,” to Thunder Bay or Toronto. She manages to escape, and then embarks on an equally harrowing journey to find her nieces.

Even through so much devastation and loss, Carnival Lights asserts that the land—and everything living on it—remembers. At one point Sher recalls finding her father frozen to death in a field:

The trees, their outstretched arms and fingers cradling delicate lines of snow, heard and saw all of it, and it became part of them, recorded in their beings, in their flesh. Ring after ring, year after year, the Standing People recorded the story of the land. They absorbed, held, witnessed. The Standing People. The libraries of the earth. The collectors of knowledge, their limbs arching over the land, over life. Holding. Bending. Protecting.

The Standing People bearing witness to horrible acts of violence against the Ojibwe is one of the central themes in the book, and it provides a sense of accountability, if not consequence, for the ongoing and pernicious attacks.

Another potent theme in Carnival Lights is that history lives on in the present, passed down from generation to generation. What lingers by the river where white men drowned a young, Ojibwe man in 1891 haunts a woman walking there decades later. In 1969, a young Jewish boy in Minneapolis remembers being raped by a Catholic priest in an orphanage after World War II—an experience that happened to his father, not him. This is all drawn together succinctly when a woman contemplates her grandchild’s propensity toward movement: “Her grandma turned to watch her eldest grandchild run into the woods. She lit a cigarette and asked the mishoomis—the trees—to help the young girl with the burden of the past that she carried, passed down through blood.”

Even in the midst of endless catastrophe, Carnival Lights offers readers a window into Ojibwe cosmology, values, and ways of being. While this is not the same as justice, it presents readers with other ways of being and seeing the world, which is healing in itself. This is not an easy story, of Ojibwe women who were targeted, violated, and even killed, but it feels like a true and necessary one. And it is also a story of some who lived and of the lost histories they told. As Sher’s grandmother says:

“Women are strong. Aren’t we, my girl?” She cupped Sher’s round face, pressing dirt into her cheeks and chin. “You, in particular. My grandmother told me stories about old-time Indian women warriors, fighting alongside the men. Sometimes fighting the men, eh?” She laughed. “The Christians didn’t like those stories to be told. They want their women to be obedient.” She swiped dirt on the girl’s nose. “That is you. The heart of a warrior.” Her hands turned to the earth. “Remember, my girl. No matter what, not all is lost. Nothing is ever gone for good.”