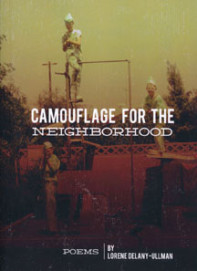 Lorene Delany-Ullman’s Camouflage for the Neighborhood explores a subject of much recent national concern: the effect of militarism upon America, both collectively and in its citizens’ individual psyches. While this territory has been explored by writers such as Kevin Powers (The Yellow Birds), Brian Turner (Here, Bullet), Ben Fountain (Billy Lynn’s Long Halftime Walk), Jehanne Dubrow (Stateside) and Siobhan Fallon (You Know When the Men Are Gone), Delany-Ullman brings to this conversation a prose poet’s eye for the way that many small parts, like individual strokes in a pointillist painting, fit together into a larger canvas.

Camouflage presents a sweeping vision of domestic militarism in America, reaching from Cold War Los Angeles—the epicenter of the military-industrial complex—to our contemporary era with its protestors, over-deployed soldiers, and peculiar blend of blind patriotism and self-doubt. To her credit, Delany-Ullman avoids taking easy political stances on the personal and social histories she examines. It’s not so easy to bemoan weapons when a family has “feasted on venison, bear stew, tender quail” thanks to a grandfather’s gun. Through concise vignettes, the poet builds a world that’s difficult to dismiss because we’ve gotten to know the people in it.

The person we get to know best is Delany-Ullman—or her authorial persona—whose life is steeped in military presence. We see childhood “duck and cover” drills at Cold War schools. We see America pre-Vietnam War, when the country didn’t question its military nature. We see a young woman fated, early on, to date and marry military men: “My Barbie tried to love G.I. Joe. But he had married war.” We see the spillover of violence into the domestic arena, with kids shooting air rifles at each other and partially blinding a homeless man with a paintball gun.

In Delany-Ullman’s vision, domesticity itself is subject to the constant threat of micro-scale military action. I don’t want to call it violence, because it isn’t random or emotional. Instead it’s organized and purposeful: “Sometimes only our dog was in the line of fire.” In the broader theater of the international world, war can break out at any time in any era—in Beirut, in Israel, in the heart of America with a dirty bomb—and the unity of those times and threats knits the components of this work together.

Stylistically, Camouflage for the Neighborhood is a straight-ahead book; its formal approach is classical (typically one flush-left stanza/paragraph per poem) and its language does not seek to dazzle inordinately. Because it is so centered on individual experience, one can read it as an extended lyric essay. It is this very slipperiness that makes Delany-Ullman’s work a notable contribution to the growing literature of American militarism in all its faces—some angry and wrathful, some protective and loving, some adrift but forging ahead nonetheless.