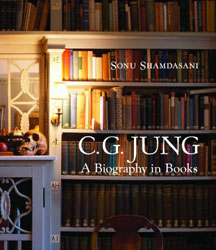 Bliss for a bibliophile, this “browse” through C.G. Jung’s library contains two hundred pages of photographed books that practically smell of stamped leather, ink, parchment, dye and paint. An exquisite visual presentation of volumes that Jung studied, as well as a number he made painstakingly by hand, benefits from the same high quality photography featured in The Red Book: Liber Novus (W. W. Norton & Company, 2009), also prepared for publication by Sonu Shamdasani, editor and translator. Shot with sensuous precision, often floating on velvety black, the books and manuscripts appear graspable—in some cases, edible.

Shamdasani, a sort of detective in the history of science, is careful to say that this book should not be taken as an inventory or catalogue but rather represents a browse or serendipitous stroll through a library. It’s an intensely focused stroll, led by someone with enough experience in the territory to illustrate every turn by footnote or anecdote. His erudition and wit shape the text into an intriguing, quietly argued intellectual biography, beginning with Jung’s boyhood craving to read.

At sixteen Jung acquired a 1563 edition of Erasmus printed in Rotterdam, which appears here in three images: the spine looking like aged green cheese, a color-printed title page with woodcut, and a spread of page 432 in the Dutch humanist’s essay Necessitas (written in Greek and Latin) showing Jung’s pencil marks in the margin. Significantly, one of the marked passages is the Delphic oracle’s phrase “Vocatus atque non vocatus deus aderit”—“called or not, god will be present.” This phrase would later appear inscribed in stone on the lintel of Jung’s home on the Lake of Zurich and, finally, on his headstone.

Jung’s personal library is still intact. The author’s photos show warmly lit shelves overseen by busts of Voltaire, Nietzsche, and Caesar. There are notes to the architect explaining how he wants the room designed—to allow for his wife Emma to do her work in the library while he was in a nearby completely enclosed room doing psychoanalysis with patients. Of course there were books in that room too, close at hand.

Jung’s library was an essential adjunct to his analysis locus [as he called his study/consulting room], and there are not a few anecdotes of his reaching to his bookshelves to show something in a book that demonstrated a striking parallel to a patient’s fantasy in a therapeutic session. On the one hand, while the contents of the collective unconscious emerged spontaneously, on the other, the psychotherapist required scholarly knowledge and capability to recognize them correctly. The thresholds of the house, library, and book were openings to the illuminated, cross-indexed psyche of those who entered.

This philological approach to psychoanalysis by way of classical comparative scholarship attracted writers and scholars—among them, Herman Hesse, whose Demian, shown actual size in original sage-grey edition with brown and gold embossed lettering: Demian, Die Geschichte einer Jugend von Emil Sinclair, was written before he met Jung but after reading him.Siddhartha and Steppenwolf both came after encounters between the two men and their minds.

Jung collected in waves according to obsessions that lasted for decades: classical philosophy and humanism, folklore and mythology, alchemy, Eastern spiritual traditions. That last phase culminated in the Bollingen edition of Richard Wilhelm’s translation of the I Ching, a publishing phenomenon due in part to Jung’s last moment coup in a foreword that gives explicit direction for the ancient text’s divinatory use.

Shamdasani laces a description of the evolving library with annotated manuscripts indicating not only the etiology of Jung’s perceptions by way of Meister Eckhart, Kant, Schopenhauer, Goethe, von Hartmann, Janet, Flournoy, and Bleuler (among others—all photographed in manuscript or print editions) but also the trajectory of his thinking. Legible images of his hand and typewritten pages supplemented by quotes from letters, like one to Freud about an ecstatic foray into myth, document the development of his psychology. “All my delight in archaeology (buried for years) has sprung into life again. Rich lodes open up for the phylogenetic basis of the theory of neurosis.”

Alongside these images, there are extraordinary books displayed in first editions—Blake’s color-soaked Marriage of Heaven and Hell, the 17th-century Rosarium Phliosophorum, Dante’sDivine Comedy, and the original handwritten manuscript of the Grimm brothers’ fairy tales. Some of these items come from Jung’s collection and some from the collection of the renowned rare books collector Martin Bodmer whose Swiss foundation displays priceless reading matter from Egyptian papyrus to the Gutenberg Bible. It took reading the acknowledgements to figure out that the Bodmer collection is featured so magnificently here because it hosted an exhibition of The Red Book that was the impetus for C.G Jung: A Biography in Books. Each Bodmer book shown is one that informed Jung’s thinking. Thus Shamdasani’s widened sense of “personal library.”

Beautiful handwriting, calligraphy, letterpress printing and jewel-like painting carry the visual thread of the Biography. Jung—who once remarked “language itself is nothing other than an image!”—spent years articulating the experiences of a self-compelled interior journey. Traveling like a mad monk through his own Middle Ages, he religiously recorded encounters with dreamlike, full-fledged narrating forces that captivated his attention with their voices and startling appearances. Whenever he turned inward to attend these visions, in deliberately invoked imaginative sessions, he noted what transpired, eventually amassing a series of Black Notebooks, three of which are displayed in Biography as source material for his developing analytical technique, several volumes of his Collected Works, and for the colossal Red Book full of complex graphic artistry.

There is a line that passes directly from the illuminated manuscript of the monk in a 13th-century scriptorium through Jung’s paintings of his visions to the contemporary comic book. I am prompted to that thought by the story that when Jung published the large format Man and His Symbols in 1964, he insisted that it be issued by a popular press and chose Dell, a publisher of comic books. The mid-point of the archetypal line is clear in the drawing of a Herculean Assyrian statue from the Louvre (Roscher’s Lexicon in Jung’s library) next to the star studded epiphany of the superhero Izdubar adored by tiny man and phalanx of crocodiles (Jung’s illuminated painting).

Jung’s defining persistence and patience led him to solitary immersion in obscure projects for decades at a time. Despite his desire to reach the ordinary suffering human being, his quest took the long way around through a forest of ancient alchemical texts out of which he extracted a thousand terms recorded in an eventual lexicon. Seventeen pages of Biography are dedicated to handwritten, symbol-filled spreads of those never seen copybooks—prima materia for Jung’s volumes on alchemical psychology. Once he had wanted to be a man of the world and “hang up exact science and put away the scholar’s gown” (declared in 1912 as he was first distancing himself from Freud), but his search, wandering according to his “human heart,” always led back to the bookshelves and to his pens—used literally to figure out complex ideas in line drawings.

Reading Jung’s words about wandering I heard the echo of a final walk I took with Norman O. Brown, another scholar whose heart’s locus was among his books. We were walking along the cliff overlooking wide beaches north of Santa Cruz, very slowly due to his Alzheimer’s. He stopped above a particularly evocative vine-draped cave, and said, ”I used to go looking for Dionysus.” Oh, really, I said, where did you look? “In libraries.”

The arc of Shamdasani’s circumambulation around Jung’s library includes the well known—Paracelsus, Freud, Joyce—but also turns to focus on the unknowns, many of them women like the medium Helene Preiswerk and the scholar of hermetic sciences Mary Atwood. The signed photogravure portrait on her book’s title page shows a heavily cloaked Victorian woman in a white bonnet sitting in a garden. She has a book in her lap with a finger holding her place and looks up as if giving a lesson. This image of a hand pointing to a line in a book (we don’t know what it is) within a book (Atwood’s Dissertation on Celebrated Alchemical Philosophers) within a book (Biography) silently captures the magic of Shamdasani’s search into the layered reaches of Jung’s mind.

This book could be read profitably in tandem with Jung’s autobiographical Memories, Dreams, and Reflections, though interested readers might want to know about the missing chapters on Toni Wolff and William James discovered by Shamdasani in another of his archival foraging trips, Jung Stripped Bare by His Biographers, Even (Karnac, 2005). Jung read with a robust lifelong desire to equip his practice with a force of knowledge greater than the force of subjective belief that most early psychiatrists fell back on when meeting the disease of their patients. The legendary strength and physical endurance he relied on for building towers and carving stone also served long rounds of grappling with the angels of a new psychology. The texts we are given to almost touch add weight and wings to that accomplishment.