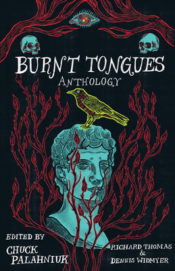 Burnt Tongues is a collection of twenty stories from authors who frequented Chuck Palahniuk's The Cult website. Originally published in 2014, it went out of print when the publisher Medallion Press went out of business; it's now being brought back with new artwork by Turner Publishing. As one would expect with understudies of Palahniuk, the stories are often gross, transgressive, full of dark humor, and written with direct, minimalist prose. While the least of them just read like rote copies of Palahniuk, the best take these elements and use them to make unique stories.

The anthology doesn't put its best foot forward with “Live this Down” by Neil Krolicki, in which three high school girls recount their bullying and humiliations as they plan their suicides. It contains exactly the kind of gross-out and trivia obsession typical of Palahniuk's work, and doesn't feel much like its own story. There is a similar problem with “Heavier Petting” by Brien Piechos, in which a stripper tells a story about a friend of a friend engaging in bestiality. I'm fairly certain there’s a Palahniuk story about almost exactly the same thing.

However, the majority of the stories do find their own voice. One that stands out is “Bike” by Bryan Howie; a simple, almost Raymond Carver-esque story about a father repainting his son's bicycle, it builds to a single sentence at the end which is ambiguous but gut-punchingly effective. It's probably the best example in the book of the power of simple sentences.

Tony Liebhard’s “Mating Calls” takes the trope of a narrator dropping trivia, often used by Palahniuk, and repurposes it to great effect. The narrator is a lonely college student who finds a phone that belongs to a popular, pretty girl. He finds himself resenting his need to hold onto it until he can get it back to its owner and annoyed by the constant calls she receives from friends that emphasize how socially isolated he is. He tries throwing himself into his schoolwork and fantasizing about becoming romantically involved with the phone's owner, but none of it eases his mind.

“Invisible Graffiti” by Adam Skorupskas is like a Tom Waits song made into a short story. A mute, alcoholic home inspector meets a homeless junkie in an abandoned building; the two go out drinking, having fun, and end up falling in love, though the story ends on an ambiguously tragic note. One would think that all these elements stacked on top of each other would result in a grotesque self-parody, but the excellent prose, sincerity, and humor make it come together very well.

Almost all of the stories are realist, however one clear horror/speculative fiction piece ends the book, Daniel W. Broallt’s “Zombie Whorehouse.” A journalist goes undercover to expose a brothel where all the women are zombies. Zombies have become a bit of a dead trope, so to speak, due to overexposure in the past decade, yet this story puts a unique spin on the idea. While it includes images common to zombie tales, such as being overwhelmed by the mindless hoard, it also includes a feminist subtext and one of the darkest endings in the book.

Despite a couple weak stories, Burnt Tongues is a solid collection of new voices in transgressive fiction. It goes without saying that it’s not for those with weak stomachs, but those who like their fiction edgy and dark will love this book.