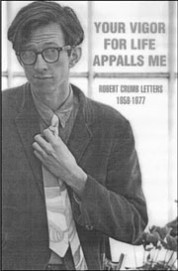 R. Crumb, whatever his past, can now only be described as an above-ground artist. A full-length documentary about his life was a world-wide hit; big-time critics compare him to Brueghel; regular contributions to The New Yorker; now a volume of the cartoonist's letters plumbs his young-manhood.

Fantagraphics Books might have more accurately subtitled their book Robert Crumb Letters 1958-1963 with a few letters added on at the end from between 1964 and 1977. The famous Crumb-the pope of the counterculture, the cartoonist laureate of the hippie movement, the guy who peddled Zap Comix No. 0 from a used baby carriage up and down Haight Street in '68-does not appear until the book is almost over. Consequently, we read next to nothing about the Summer of Love, about Crumb's LSD-induced loss of artistic inhibitions, about his transformation from square to hippie icon alienated from the hippies. Dominating the book instead is the young Crumb, a philosophically-minded pubescent misfit distinguished by a sure sense of the comic book's artistic potential. Deep-thinking teens don't always make interesting writers, and the question arises: are the letters of an adolescent who collects Little Lulu comic books going to be worth reading?

In this case the answer is yes. Young Bob's ponderings of such big questions as free will, personal authenticity, Christianity, and romantic love offer a poignant testimony of an unconventional (if unexceptional) mind unfolding in the hostile surroundings of squabbling parents and an all-American high school. True, much of the philosophizing is boilerplate teen moping, and the young Crumb doesn't sound much like Wilhelm Meister or Stephen Dedalus-but what else should be expected from a real boy? It is to their roughness that these letters owe their charm: the halting, jerky sentences, the unfinished thoughts connected by ellipses, the runaway enthusiasm, the occasional banality. The young Crumb comes off as discerning, self-critical, and sensitive-a kind and encouraging friend. Some of the artist's detractors will be surprised to learn that the 17-year-old Crumb declared himself "what you would call an 'ardent feminist.'" His sympathy for the civil rights movement also sets him apart from his peers.

None of this, however, really foreshadows Crumb's artistic achievement. This we find in his intense and precocious devotion to the comic book medium. At 15 he is pronouncing discerning judgments on the comics he collects; at 17 he already commands a remarkable facility with the medium, as demonstrated in an epistle to a fellow comics geek done in comic-book form. Judging from Crumb's letters, full of exhortations to work, the artist owes his talent as much to years of sedulous practice at observing, drawing, listening, and writing as to inborn spleen.

Crumb's writing, a dimension of his comics that usually passes unappreciated, receives a welcome spotlight in these sparsely illustrated letters. These exhibit the artist's ear for the American vernacular and gift for phonetic rendering of spoken words, viz. "abuncha," "discusted," "fambly," "gummint," "perty mizzuble," and "gubbye," all of which, along with many other expressive misspellings, editor Ilse Thompson has lovingly preserved from the manuscripts.

Much of the letters is given to listing the old 78 records Crumb and one of his correspondents add to their collections. Readers may skip over this, or they may linger and enjoy the archaic-sounding names of songs ("Hey! Stop Kissin' My Sister," "Thanks for the Buggy Ride," "Betty Coed") and performers (McKinney's Cotton Pickers, The Famous Hokum Boys). In his comics, Crumb frequently evokes the music and culture of "Old-Time" America from the 1880s through the 1920s as a virtuous counterpoint to the decadent masscult of the postwar republic. Crumb's hard-bitten dislike for all rock'n'roll as a teenybopper commodity comparable to spearmint gum is one of the letters' most refreshing motifs.

I should also mention that armchair psychotherapists who feasted on the Crumb family romance in Terry Zwigoff's movie will not be disappointed by this book, where they will find plenty of new nourishment. But even those without these proclivities will find in this record of qualified success, growing worldliness, and growing older a touching nonfiction Bildungsroman, written in demotic American English. The experience of reading these 15 years of letters will be rewarding for even casual fans of R. Crumb. 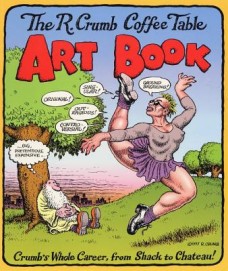 Two new offerings round out this year's cornucopia of Crumb. The Life and Times of R. Crumb, a festschrift edited by Monte Beauchamp and published simultaneously by Kitchen Sink Press and St. Martin's Press, presents short reflections on Crumb by his contemporaries. Most of the articles are written by fellow cartoonists, of course, but also weighing in are writers, composers, critics and filmmakers, among them Jim Jarmusch, Terry Gilliam, Marc Trujillo, Roger Ebert, and Paul Krassner. The book probably could've used more of these outside voices, though what's here covers a full range, from unabashed reverence (summed up by Jim Woodring's "I feel privileged to share the planet with him") to musings on the detrimental aspects of his widespread influence. The book also includes a sampling of Crumb's artwork, with an especially generous color selection of musicians' portraits.

For scads more artwork, look no further than The R. Crumb Coffee Table Art Book, co-published by Kitchen Sink and Little, Brown, and newly released in paperback. It's title is only partly tongue-in-cheek; the book's lavish production indeed argues that Crumb is "a real artist," whatever that means. Including a vast array of material-strips, sketches, covers, even oil paintings (who knew?)—the book is broken down into thematic sections, and each section is introduced by Crumb with a short essay bearing an over-the-top title such as "My personal obsession for big women sometimes interferes with some people's enjoyment of my work!" Respectable despite himself, this underground legend is justly celebrated in these books, and their collaborative publishing schemes offer further evidence that prime-time may at last be ready for Crumb.