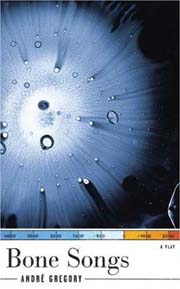 André Gregory's Bone Songs is a layered, melancholic work driven by its language. The publication of the play itself—Gregory's first, though he is an acclaimed director and filmmaker—is one manifestation of this complex layering, since Bone Songs is the theatrical avatar of Gregory's performance "After Dinner with André," which is Bone Songs collaged together with "fragments from my [Gregory's] life, childhood and first marriage, as well as thoughts about love, death, time, and just about anything else that pops into my head in the moment faced with each night's particular audience."

The complex identity of the text mirrors the complex identity of its characters. With a heartbreaking plurality of identity, characters from different points of the same lifetime are able to explore the dangerous terrain their life has covered. While the characters are clearly differentiated from one another, they are primarily defined by their relationship to each other. Older He and Younger He offer two perspectives of one man's lifetime, and they are coupled with the same dynamic form in their respective spouses, Older She and Younger She. The Explorer, possibly the next stage of life for Older He, is a haunting and tortured character—his songs and soliloquies are like spells; he is a warlock of the human capacity for grief.

Fittingly for a verse play, it is the breathtaking language of the work that holds the publication together. The language of Bone Songs and the universality of its generically named characters allow it to escape the solipsistic gravity that claims so many narratives based on personal experiences. Although the He characters blur with Gregory (especially in performance), the characters in the work are whole unto themselves and don't serve as his direct surrogates within the play. Thus we stay in the experiences of the characters; as they tell their story we think of them, not Gregory.

Bone Songs is primarily set in Antarctica, and the personal terrain of the work matches the physical terrain of this locale: foreboding, difficult, and beautiful. The Explorer sets up this dichotomous relationship: "words like 'love' and 'seeing you' are things we learn in school, but no one tells what happens next when you're far out at sea..." Here the personal and the physical merge, each elucidating the other. This abstract setting, described in only the sparsest fashion, isn't a land that Gregory (or anybody else) calls home. With section titles such as "Waking the Spiders on the Floor: Things You Should Have Said but Never Could," the play takes us to a little-understood land where each memory is as stately and threatening as an iceberg.

Despite Gregory's focus on character and setting, neither people nor landscape really drives Bone Songs; instead, the play is built around tone. The audience feels its way through the events of the story and the experiences of the characters; we are drawn in by the telling of their stories. The rhythm underlying the tone is contrapuntal in its warmth, and the beat of the play's language is sexual, almost a chant—but a mystical, spell-casting chant, not a prudish Gregorian. Even when Younger She denies her partner physical contact, the rhythms of the language keep their sensuality:

No. No.
Let go.
Only whisper to me,
whisper to me.
Tell me, if you must,
but without a sound how much
and if and when and why.

The sentences are short and made breathy by the line breaks, while the "w" and "s" phonemes augment this and simultaneously add an intimate whisper to the iambs that dominate the language. This level of detailed attention to the smallest points of language makes the work consistently powerful.

Because the performance of Bone Songs also incorporates spontaneous monologues by Gregory (here collected at the end of the text in a final segment called "Fragments"), the play's poetic strengths are coupled with the raw spontaneity of live performance. For a work of such well-constructed language to incorporate the unplanned elements of the performance successfully and then have them live on the page is impressive indeed. The spontaneous elements of the performance layered into the conscious reading coupled with the surreptitious aliveness of Gregory's language gives the greatest threat to all that ice—there is something warm, something profoundly human, that could melt away the cold.