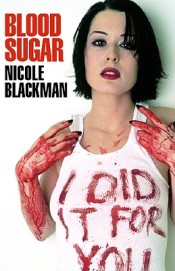 Deemed "an alt-rock diva" by the Village Voice, Nicole Blackman is as much a musician as spoken word artist and writer, one who infuses stanzas with such lyrical quality, they resemble refrains. Blood Sugar, her debut poetry collection, pulled from popular chapbooks Pretty, Sweet, and Nice, offers honest, literal poetry, capturing the sentiments of a generation of self-proclaimed lost souls.

Blackman's work appears in major anthologies including Aloud: Voices from the Nuyorican Poets Cafe, Verses That Hurt, and Poetry Nation. She has performed on over a dozen albums, including releases by the Golden Palominos, KMFDM, Scanner, and Recoil, as well as for NPR, MTV Radio, and SPIN Radio. L.A. Weekly calls her book "a shadow-strewn kaleidoscope of angst, anguish and survivorship," and Time Out describes it as "incisively chilling as it is real."

Her poems, delivered from the points of view of anonymous characters, provide a quietly stabbing '90s commentary. A certain boldness peers through her depictions of insecurity, isolation, and fear, allowing images to resonate, not wallow, resulting in freshly stacked lines: "no one here has goals like get a job, get married, have kids / the ambitions are wake up, breathe, keep breathing" or ". . . we need to kill the pain of all that nothing inside so we take Advil because it goes down like an M& M and we understand that we asked for a real future . . ."

Blackman's use of pop cultural references for her critique of pop culture itself may be overdone. But her spoken word influences, transfixing repetition, and cutting perceptions create a quietly violent work that seeps in.