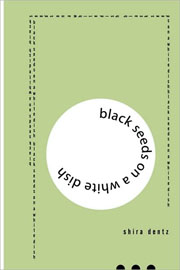 The title of Shira Dentz’s first collection of poems, Black Seeds on a White Dish, tells us we’re in for a voice whose particular way of moving through the world leans toward the visual, if not the ekphrastic, though ekphrastic isn’t quite the word. Layered, spare, wide-eyed, even lonely—these are more accurate, the way a still life might depict a porcelain bowl holding fruit on a knotted cedar plank table in a darkened room. There’s a tension throughout the book that sways back and forth between exposure, vulnerability, and abundance, fullness.

Dentz’s work finds its balance amid the gathering.Halfway through the book, in a poem entitled “I carry,” she writes, “some people like to find unassociated bits of things and put them together.” And this is exactly what she does, though it would be too easy to claim this line as Dentz’s ars poetica, her lyric cornerstone; the collection is far more complex than this, and admittedly, at times, a bit more opaque, to alternately perplexing and drawing degrees. Elsewhere, in “The Existing Lover in Everyday Life,” the speaker claims, as if trying to convince herself of a reality she longs for, “I will appreciate disconnected bits of form.”

And so, in “Getting Closer to the Big Bang,” for example, Dentz takes physics, the Sphinx, and the sound of a creaking car, and places them side by side, as if in triptych, rendering the images as evidence in support of the poem’s final stanza: “Pick particles from sounds, watch phrases rise overhead. When my / brother died I was 8, and wanted to write a requiem to the universe, / even if it lasted only 40 seconds.”

Further, as if in response to the call sent out earlier, Dentz returns the plaintive volley with a dazzlingly grave image—what Jane Hirshfield, in a recent essay, called a “window-moment”—where the speaker’s attention shifts so as to open the poem onto a wider world of meaning:

One on either end,
two sparrows hold a robe in their beaks.

This is the robe of loss,
the wind creates a gully in the fabric.

The requiem of the poem is written, yes, but not exactly as requiem, just as the robe, in the above image, is both an ordinary object and something entirely other, a manifestation of the emotional terrain through the conduit of image.

Perhaps the most impressive poem of the volume is “Still Life of a Woman,” a decidedly contemplative poem near book’s end that attempts to articulate the particular weight that comes from not actively engaging in eros. Dentz writes:

For someone who has lived mostly celibate,
there is music—tones like pressure on almost-ice water
packaged in see-through plastic—
ripples like sunlight and shadows of branches and leaves.

In just four lines, Dentz manages to establish an unmistakable and insistent longing. Later in the poem she writes:

My bark turns gray.
August, the harvest moon sags.
This the only August I will be forty.

There is no child.
A part of me is dying, I would like to say.

Here, the speaker becomes arboreal, like so many Greco-Roman myths, a disembodied voice that would like to say a part of her is dying, but can’t. In reality she has already done so, but doesn’t quite recognize the power in her own voice.

There’s a gravity to Dentz’s work that’s in constant concert with levity; in some poems greater connective tissue could be drawn between adjacent verbal bricks than mere sonic wordplay, though that, too, has its pleasures: “jade slate fennel vernal fertile beryl bile / crocodile kelly Comet kermit corporate.” Still, Black Seeds on a White Dish displays a palpably reflective mind driven by a meandering, perceptive eye. The book baffles even as, especially for acute moments, it dazzles.