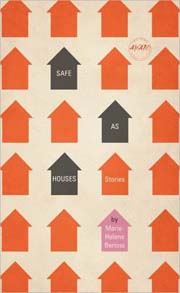 The eight stories in Marie-Helene Bertino’s debut collection occupy worlds both recognizable and resolutely askew. Drawing deeply on American pop-culture, Bertino takes quotidian dramas—stories of heartbreak and alienation, depression and fraught familial relationships—and amplifies them with playful and fantastical conceits. (College misfits wield superpowers; a totemic celebrity and an alienated alien make cameo appearances.) A clever writer with a consistently disarming voice, Bertino commits wholeheartedly to the peculiarities of the worlds she creates and plays them out with verve and precision. These poignant and darkly funny stories function less as departures from realism than as visions of familiar realities metaphorically enhanced.

The collection’s fourth story, “North Of” (a 2007 Pushcart winner), exemplifies Bertino’s aesthetic. It begins: “There are American flags on school windows, on cars, on porch swings. It is the year I bring Bob Dylan home for Thanksgiving.” Estranged from her older brother who has recently been called up for duty in Iraq, the story’s narrator returns home with the literal Bob Dylan in tow, hoping the protest singer’s appearance will convince her brother not to go to war.

This sort of premise runs the obvious risk of feeling overly contrived or gimmicky, but Dylan’s presence allows Bertino to broach difficult feeling indirectly. On the surface, the famed singer becomes an opportunity for levity. With the exception of the narrator’s brother, no one recognizes him. He does not speak. He mopes, half-heartedly helps with dinner, smokes, tries to fight a convenience store clerk who mistakes him for Vincent Price, and searches unsuccessfully for Tootsie Rolls (“He’s wild over them”). Predictably, the narrator’s plan ends up a failure: “[Bob Dylan] was supposed to create some sort of lather, and he barely summoned enough energy to behead a pile of string beans.” For the story, however, Dylan serves as a catalyst. As the narrator drives him through her hometown, she recalls the twists and turns in her relationship with her brother and confronts her guilt for abandoning him, for living a different, bigger life, while he remains mired in place. At the dinner table, Dylan’s bumbling presence brings these feelings into dramatic relief. He becomes something more than a simple humorous contrivance—an actualized metaphor, an embodiment of the painful tensions that have grown up between the narrator and her older brother.

Bertino deploys a similar strategy in many of the collection’s stories. Again and again, she manifests the inner struggles of her characters as concrete features of the worlds they inhabit. In “This is Your Will to Live,” a traveling salesman attempts to peddle his own “sob story,” his still-beating heart, and a “will to live” potion (packaged as bath salts) to the suicidal narrator. “Sometimes You Break Their Heart, Sometimes They Break Yours” explores alienation by adopting the viewpoint of a narrator who, claiming to come from another world (whose unpronounceable name “sounds like a cricket hopping onto a plate of rice”), works as a receptionist and faxes reports on human behavior to her home planet. In “The Idea of Marcel,” the heartsick narrator goes on a dinner date with the “idea” of her ex-boyfriend, only to come across her actual ex-boyfriend later that evening having dinner with his ideal version of her.

In addition to the enjoyment of watching an author adroitly navigate these imaginative set pieces, much of the reading pleasure in Safe as Houses comes from Bertino’s humor and her deftly vibrant prose. Filled with funny and sharply rendered observations (“His face is AP calculus”; “Her perfume smells like Vanity Fair magazine”), many of the stories’ best moments come when the narrators approach painful feeling through humorous and evocative description. In the opening story, “Free Ham,” the narrator offers this image of a fire engulfing her house: “It is as absurd as a dinosaur, hurling its arms and legs through the eaves and gutters.” The elderly narrator in the collection’s title story, who enacts the grief of losing his wife by ransacking neighborhood houses and stealing mementos, encapsulates his own despondency when he describes his neighbors’ “innocuous beach” portraits as “framed fuck-yous.”

While the voices of Bertino’s narrators begin to blend together across the collection and her fantastical premises become slightly predictable, the energy of her language, the emotional incisiveness of her descriptions, and the inventiveness of her metaphorical conceits provide continual delights. In Safe as Houses, she has crafted a fine and exciting debut.