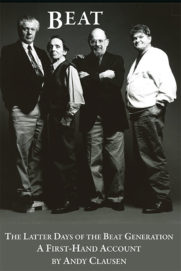 First-hand accounts of legendary cultural figures such as Neal Cassady are rare. Andy Clausen’s memoir of his relationships with Beat writers is notable for its unpretentious working-class perspective. Clausen spent much of his life with people who saw poetry as a calling. He related to street poets such as Gregory Corso, Jack Micheline, Bob Kaufman, and Ray Bremser. While admitting that “beat” is hard to define, he sees the cultural movement as “a rebirth of freethinking.” Unorthodox in its structure, the narrative leaps quickly from one time period to the next, as one memory triggers another.

This deceptively slim volume is stuffed with personal anecdotes featuring some of the great outrider literary giants of the late twentieth century, among them Amiri Baraka, Charles Bukowski, Ed Dorn, Lawrence Ferlinghetti, and Diane di Prima. The book likewise includes insightful reminiscences of unique personalities such as Ray Bremser, Jack Micheline, and Bob Kaufman. Clausen tells hilarious stories, including his friends’ verbal harassment of Richard Brautigan after the famous author “looked at [Clausen’s] extended hand like a buffalo looks at a billboard, then down his nose like my hand was a piece of unclean, unworthy matter.” Clausen recounts his first conversation with Allen Ginsberg, which took place as they looked for a place to pee outside after the elder poet arrived at a party in San Francisco to find Clausen and several others dancing naked.

Seeing Ginsberg on TV helped Clausen decide to quit the Marines; getting to know him helped Clausen love and accept gay people. Ginsberg was generous with his time and his money. He introduced Clausen to famous people and helped him get teaching gigs and poetry readings. When Clausen was “young brazen unstable, doing the rambling man thing,” Ginsberg “taught me knee to knee, went over my fifteen-page poems scrutinizing every word, questioning every ambiguity, flushing out the language of my intentions.” Over time his mentor persuaded him to gain control of “the spaghetti” shape of his poetry by paying closer attention to the line, helping Clausen to rid himself of the habit of spreading “margin to margin with some kind of economic and ecological justification.”

Clausen confesses that “being Allen Ginsberg’s protégé didn’t open doors and minds as much as one might expect.” Certain poets rejected the Tibetan Buddhism of Ginsberg’s guru Chogyam Trungpa Rinpoche. Others merely resented Clausen or dismissed his work because of their jealousy over his closeness to Ginsberg:

Some of his old friends were bitter toward him because they felt he hadn’t done enough to further their careers. Well, he read with me at least thirty times, showed my work to publishers many times. He introduced me to the prevailing scene, got money from Bill Gates to put out my book 40th Century Man, and still I had to mix cement and carry heavy objects in order to put gas in my hooptee. . . . My book sales were in the low hundreds, my infrequent paid readings were infrequent. Come on, everybody, this is what you’re jealous of?

Clausen doesn’t shy away from telling the truth about his legendary friends. He is honest about William S. Burroughs’s and Ginsberg’s sexism. He provides a fascinating insider’s account of Peter Orlovksy’s mental illness and Ginsberg’s enabling of his life partner’s “extreme behavior.” He shares amazing stories of Gregory Corso meeting an abandoned son, inviting a Hell’s Angel to join him onstage during a reading at the Naropa Institute, and shooting up inside the Museum of Modern Art. Nevertheless, Clausen makes it clear that what he learned about life from these icons of literature was more significant than any assistance they may have given his career.

The memoir includes moving recollections of Corso’s final years. Clausen praises Corso as a “fantastic poet, a philosopher shaman who . . . enlivened every room” while also admitting that he was the “master Beat con man.” Corso was a “much disliked, even despised, but well-loved roguish classic genius, renegade archaic and revolutionary syntax virtuoso, elegant master painter of the action that inspired the word.” Although the poet had many personal flaws, hanging out with Corso showed Clausen “that love might have power . . . I’ve witnessed friendship that neither samsara, money, pride, nor time could break, friendship whose depth is fathomless.”

Refreshingly self-aware and conversational, Beat tosses off insights without appearing self-aggrandizing. Clausen’s honest take on machismo, masculinity, and “toughness” is much appreciated. The book ends with a litany of memorials for Corso, Herbert Huncke, Orlovsky, and the California literary scene. While he regrets not completing a college degree, Clausen received a lifelong education from a variety of pursuits: “boxing, drugstore kicks, Marine Corps, acid, the Love Generation, back to the country, on the road, construction, factory, taxi, sawmill, loading dock, pearl diving, hod carrying, poetry in the schools and prisons, and all the other shit.”