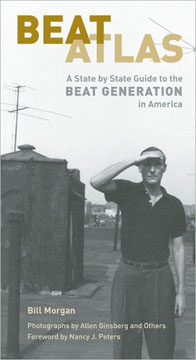 We, who have seen the best minds of our generation drained by dullness, craving celebrity scandals, deluding themselves with best-selling fixes, inspirational guides, and other coffee-table grounds; we common educated readers, rubbish-resistant and reluctant to praise, yet always ready to recognize talent (or at least genuine effort), we may look at this little treat of a book, smartly designed and handsomely elongated to fit smugly in a pouch or pocket, and expect more than its format suggests. Some readers, in fact, may get confused or frustrated by the way in which biographical details are chopped off and scattered all over the map, in a kaleidoscope of inconsequential and occasionally repetitive fragments. (The index helps to identify and reconstruct the narrative, yet it does so in a topographical rather than chronological order.) The emphasis on topography should further remind readers that Beat Atlas is a reference book, and as such is meant to be consulted, not read cover to cover. (No reference book is anyway, let alone one that aims to document the peripatetic writers of an entire generation).

In fact, while contributing to the Beat canon, the Atlas also belongs to a sub-genre of reference works such as Ehrlich and Carruth’s Oxford Illustrated Literary Guide to the United States or its northern counterpart, Albert & Theresa Moritz’s Oxford Illustrated Literary Guide to Canada, as well as more geographically or historically specific works like Miriam Levine’s Guide to Writers’ Homes in New England (1984), Noëlle B. Beatty’s brahmanic Literary Byways of Boston & Cambridge (1991), and scores of other topographically-minded titles. What distinguishes Beat Atlas from such guides, though, is its focus on a literary generation rather than geography.

Following in the steps of his two previous guidebooks, The Beat Generation in New York (1997) and The Beat Generation in San Francisco (2003), renowned Beatologist Bill Morgan takes the reader on the road and in all fifty states, starting in the working district in Lowell, Massachusetts, where Jack Kerouac was born, and ending in a Tibetan hermitage in the rain forest of Hawaii, whose natural surroundings, not to mention the crescent- and star-shaped windows, inspired the poet Michael McClure. In between stops include big cities and small towns alike; but also national parks, wilderness areas, mountain peaks, lookouts, and the Arctic Ocean. The latter provides a lesser-known glimpse of Allen Ginsberg as a young merchant marine, passing through the Bering Strait in July 1956, “on a freighter that supplied the DEW (Distant Early Warning) line along the northern coast of Alaska.”

Sketching a literary topography of the country inhabited and crisscrossed by the Beats during the coldest and direst years of the Cold War (as the DEW detail reminds us), the Atlas defines a geographic and cultural space which is far removed from our own, yet which sometimes feels strangely, even grotesquely, familiar. This is the space where major and incidental figures were born and grew up; went to school (or, more often, dropped out of it); enlisted in the armed forces or sought temporary employment, only to find themselves unfit for either; married, divorced, remarried, re-divorced; committed crimes from the pettiest to the most serious, and were arrested, imprisoned, bailed out; drank and took drugs, and were treated for mental conditions; wrote, published, read their work, lectured and taught; campaigned and protested against the dirty secrets and lies of their time; and eventually died—prematurely for the most part, and occasionally tragically, but almost always sadly. The multitude of domestic and institutional addresses depict a social and existential landscape defined by unrest, displacement, alienation, sorrow, paranoia, and violent and self-destructive behaviors. Not surprisingly, psychiatric hospitals, rehabilitation centers, and correctional institutions figure as often as schools, colleges, and academic libraries, although some of the latter house major collections of Beat-related materials—poetry in particular.

Much of the Beat Generation’s appeal lies in its anecdotal substrate, rather than in its strictly literary output. This inevitably results in the inclusion of ancillary figures whose relationship to the Beats was ephemeral, instrumental, or outright tragic. A number of entries document David Kammerer’s homoerotic pursuit of Lucien Carr throughout the country, until Carr murdered him in Manhattan’s Riverside Park in 1944 (an event that the present guide does not cover, focusing instead on Kerouac’s incarceration in the Bronx County Jail as a material witness). In keeping with the male-dominated world of the Beats, the women within Beat Atlas are often married, divorced, abandoned, or murderded rather than truly and fully acknowledged for their literary or artistic achievements. For instance, both Billy Burroughs Jr. (William S. Burrough’s only son) and Jan Kerouac (Jack’s only child, whom he refused to acknowledge) followed in their fathers’ steps: leading vagabond lives, fighting drug and alcohol addiction, and managing to publish a couple of novels each before dying at earlier ages than their more famous parents (Billy at 33, Jan at 44). Jan, however, receives significantly less attention than Billy in the book, something that is reflected in the (not always reliable) index. More balanced is the extent to which Morgan documents the Beats’ intersections and interactions with other literary groups and figures. In addition to Ezra Pound’s and Walt Whitman’s birth places, the Atlas includes entries for some major poets associated with Black Mountain College (Robert Creeley, Ed Dorn, Charles Olson), the San Francisco Renaissance (Robert Duncan, Madeline Gleason, Kenneth Rexroth, Jack Spicer), and the New York School (John Ashbery, Kenneth Koch, Frank O’Hara, James Schuyler), as well as composer Philip Glass (who introduced Ginsberg to his own Buddhist teacher, and whose opera Hydrogen Jukebox put some of Ginsberg’s poems to music), the publishers James Laughlin (of New Directions), Barney Rosset (the owner of Grove Press and founder of the Evergreen Review), the writers Hubert Selby Jr. and Charles Bukowski, and the musicians Bob Dylan and Joan Baez.

How many of the locales described in Beat Atlas will actually become travel destinations is difficult to say, and this is perhaps the main difference between this and Morgan’s two previous guidebooks. It is easier, in fact, to pack The Beat Generation in New York or The Beat Generation in San Francisco when travelling to either of these cities than it is to plan a trip based on this fragmentary topography. Nevertheless, the book’s value somehow exceeds its practical purpose as a travel guide, and therefore it should not come as a surprise if readers are inspired to visit their local library rather than to hit the road. But it is difficult to imagine a line of Beat aficionados forming outside the St. Mary’s Cemetery in Appleton, Wisconsin, where in February 1968, after giving a reading with the satirical rock band The Fugs, Allen Ginsberg and fellow poets Tuli Kupferberg, Ed Sanders, and Ken Weaver “performed an exorcism at the grave of Senator Joseph McCarthy”; or a couple of college seniors planning a field trip to the minimum-security prison in San Luis Obispo in which Timothy Leary was serving a twenty-year sentence on drug-related charges when, in September 1970, he managed to escape. With the help of the Weather Underground, Leary and his wife fled to Algeria, then to Switzerland, Vienna, and Beirut, eventually landing in Kabul two years later.

This and other experiences, explorations, and expatriations to foreign countries (Mexico, of course, but also Europe, North Africa, South America, India, and Japan) seem to prefigure the next title in the series. Readers who want to know more about Leary’s années de pèlerinage, or the European career of the Harvard-educated poet Alan Ansen after he helped edit William Burroughs’ Naked Lunch manuscript in Morocco, or who wonder whatever happened to (Elizabeth) Hope Savage, “Gregory Corso’s first great love affair,” after she “moved to India and lived a vagabond life,” stumbling upon Ginsberg on the streets of Calcutta in 1963, only to disappear “again into the crowds,” might have to wait another seven or eight years. And while doing so, these readers will have ample time to ponder Beat Atlas’s few minor flaws, namely the occasional typo (such as Bering Straight instead of Strait), the inadequate index (Gabrielle Kerouac, for example, figures in many more pages than the two that are listed), and at least one misattribution: both Gary Snyder and Philip Whalen graduated from Reed College, in Portland, Oregon, in June 1951; but it was the former, not the latter, who presented a senior thesis “titled ‘The Dimensions of a Haida Myth.’” The text’s full title is He Who Hunted Birds in His Father’s Village: The Dimensions of a Haida Myth, and it was eventually published by Don Allen of Grey Fox Press in 1979, reprinted in 1991, and reissued by Counterpoint in 2007. An awkward slip, given Morgan’s vast expertise on the subject, but one which readers will be willing to forgive.