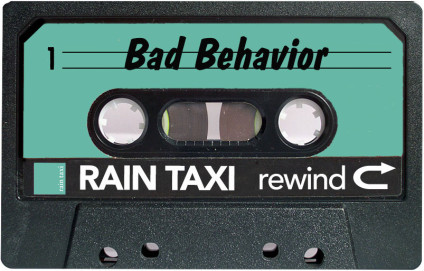 Here’s a question the public typically reserves for our pop artists and athletes: how do we expect our writers to behave? My initial answer would have been, well, nothing; I don’t look for anything from a writer outside of his or her work. But just as this isn’t true when Americans talk about rap stars and football players, it’s not quite true for our Great American Novelists and Poets, either. Readers love a good eccentric; we want our writers to act up a little bit, to display the unique mind that created a book we love—but not too much. It’s why we love a good artist biography: we can look at a writer’s life and roll all the weirdness and repellent behavior into a persona that becomes as noteworthy a contribution as any book the author writes. Think of what you love about Hemingway, or Virginia Woolf. How quickly does your mind turn from their books to the person? Same with Salinger or Harper Lee, both of whom are intriguing because of how little we saw of them.

Really, writers are no different from the musicians or artists whose life matters to us as much as their work. But our expectations shift with time: we want “normal” in the present, but enough interesting material to talk about once they’re gone. It’s the same goalpost we move on anyone who becomes publicly successful, and it seems to be an integral part of the way we engage with our artists. It also isn’t fair. Something tells me, though, that at the end of the day, most artists won’t mind this tradeoff too much. “Fair” and “normal” aren’t exactly what they signed up for in the first place.

Some of Rain Taxi’s best pieces on eccentric artists:

Review by Will Randick of Mr. West by Sarah Blake (Fall 2015, online)