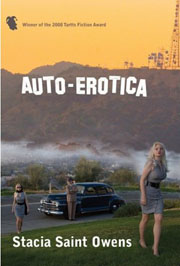 There’s blood and bile but also weird beauty in Stacia Saint Owens's debut collection of short stories, Auto-Erotica. In stark, surreal evocations of the damaged and rapidly imploding dystopia commonly called Southern California, Saint Owens reveals the macabre through narrative dream states in which the grotesque becomes distressingly commonplace. Her acrobatic telling mimics the antic conflicts and dimensions of the characters themselves, making this an eminently stylized and accomplished collection.

The great excitement of these stories is in their daring structures. While it may be fair to characterize many of them as experimental, what really stands out is in their magnificent difference from one another. A strong thematic current unifies the book, though, invoking a violent brand of contemporary isolationism and the sometimes perverse sense of hope people create in order to deal with existing in an urban wasteland.

Saint Owens is selective in her portrayal of the kinds of people that inhabit Hollywood and its surroundings. Like Nathaniel West in The Day of the Locust, she does not attempt to crawl inside the machinery of the dream-killing movie industry, but instead tells of the shockwaves surrounding it. Her characters haunt the dangerous fringes of an illusory world, often putting themselves in great physical risk or pain. Perhaps the most horrifying example of this is in “Somewhat Funny,” where a beautiful young woman in love with an alternately indifferent and hostile recluse seeks a state of complete abjection in order to win his approval, only to be even more thoroughly rejected. Yet, the state of denial is not an end for the protagonist, Misty, who realizes an entirely new level of isolationism and basic malevolence seemingly connected to the earth itself:

There was a low, vast rumble and an insistent, tinkling little shake. It could have been a minor earthquake, but to Misty it was a jet airplane taking off from Dallas Love Field. She saw herself steering the plane with one finger, and if she wanted to crash it, she could.

This kind of radical shift in character perspective informs the best of the stories in the collection, including the stellar “Viv Thraves Goes Missing,” an account of a surviving member of a sex worker team who may be responsible for the disappearance of her former partner. Here, the performance of entertainment and the construction of time compete with one another to enclose a mystery that may not be a mystery at all. The really compelling truth, of course, has less to do with a missing persons case than with the nature of innocence, desire, and belief.

Auto-Erotica proves Saint Owens to be a writer with fire in her fingers and a dark weather in her heart. Her stories push beyond the limits of what we expect, but carry us with them to their final destinations. In the end we should be quite grateful for it.