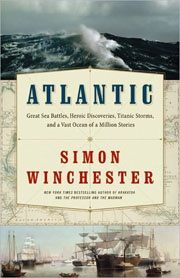 Simon Winchester, author of more than a dozen books and frequent traveler on the Atlantic, takes on the difficult task of trying to explain that ocean’s history and wonder. Unlike Hugh Ambrose’s recent The Pacific, which chronicles the personal experiences of soldiers during and after World War II, Atlantic is a multifaceted exploratory journey which seeks to answer wide-ranging questions about this unique ocean.

A variety of historical players are described in a barrage of tales that includes four continents and their exotic sounding, and sometimes remote, ports; all manner of ocean lore is presented; and various interpretations of the Atlantic are provided. Winchester takes so many approaches because, as he posits: "It is a tricky tale to tell. Simple chronology might suit very well the story of the making of the physical sea itself—but the details of the human experience are scarcely so amenable."

To describe his growing understanding of the Atlantic Winchester starts each chapter with a quotation about one of the seven stages of life from the famous "All the world's a stage" monologue in As You Like It: "Infant; School-boy; Lover; Soldier; Justice; Slipper'd Pantaloon; and second Childishness." For example, he opens Chapter 6:

The sixth age shifts
Into the lean and slipper'd pantaloons,
With spectacles on nose and pouch on side.
His youthful hose, well sav'd, a world too wide
For his shrunk shank; and his big manly voice.
Turning again toward childish treble, pipes
And whistles in his sound.

While somewhat anthropomorphic, this leads to a well-told chapter about the failures of marine conservation, especially the demise of the cod fisheries of the American Northeast. There is also good coverage of global warming’s impact on the Atlantic.

Winchester’s presentation encapsulates past and future—when all the continents were, and will be again, a single, large landmass—but it also reveals the present gray waters humans have always known. All sorts and stripes have sought their fortune on it, including explorers, fishers, travelers, artists, writers, soldiers, merchants, scientists, and defenders. And many, like the author, have left their mark; Atlantic is a wondrously quotable book (e.g., "From here onward the sea yawned open wide and featureless, and soon took on the character that is generally true of all great oceans—being unmarked, unclaimed, largely unknowable, and in very large measure unknown").

The Atlantic is the most overused and traveled ocean in the world. In reading about its history, its majesty, and its vastness, in Winchester’s powerfully human terms, we are left to contemplate how the ocean appears to be fighting back with rising waters and severe storms.