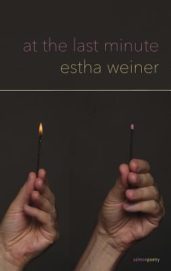 Precision, wit, timing, and agility are important to an actor. The ability to speak “trippingly on the tongue,” making yourself understood in the upper galleries or to groundlings below, to play both tragedy and comedy at the flip of a coin—these are the merits of the Shakespearean performer.

Estha Weiner studied the dramatic arts in England before returning to New York to continue her training. Born in Maine, she grew up in a Jewish household, bearing the brunt of jokes from her parents: “Who do you think you are, Sarah Bernhardt?” But tenacity, talent, and moxie prevailed, although perhaps she encountered criticism regarding her “too-Jewish” looks, as she was daddy’s “dark / little girl.”

However, Weiner watched and listened, honing her theatrical craft as well as her ear for Shakespeare. She studied poetry and literature as well, becoming a teacher at The Shakespeare Institute in Stratford, England and the City University of New York, among other places—while remaining, of course, an occasional actor.

Written with an easy informality, Weiner’s poems are short and deft, replete with nimble precision, careful line breaks, rhythmic mastery, rhyme-sense, Shakespearean allusions, and, above all, simplicity. These are traits vividly displayed in “Exit, pursued by bear,” that most famous of The Bard’s stage directions from The Winter’s Tale:

When I was paid
to wear a mask,

I lauded authenticity,
off-stage, as well as on,

transparency, the open
book, the open vein: my song.

All the world is still
a stage, though I’m a different player.

It seems the mask works just as well
off-stage as it works on,

Here Weiner plays figuratively with one of Shakespeare’s most famous conceits, “All the world’s a stage” from As You Like It, but teams this with a reference to The Taming of the Shrew, in which the character Kate attempts to deny her socially defined role or mask, eschewing behavioral expectations and obligations. Kate transgresses both social and gender boundaries and asserts an “honest” and “authentic” self.

These are favored Shakespearean motifs: disguise, mistaken identity, and the clever lie. Weiner suggests that the social “mask” works in real life “off-stage” as it does on. In fact, there is a tinge of feminist sarcasm in Weiner’s final couplet, when she compares “honesty” to an “unruly shrew”—something to be “tamed,” subdued, and discouraged. But Weiner resists reductive thinking and simplistic labeling. Like Shakespeare, she goes for the universal and the individualistic in human nature.

“Who do you think you are” mentions Weiner’s Jewish parents, who tease their daughter about her unrealistic goals and inflated ego, woefully inadequate compared to the Jewish thespian Sarah Bernhardt. Concise, revealing far more than stated, this poem conveys her complete family history:

“You, with the drama,
enough already!” My mother
acted, on stage and off;
my father acted like he wished
he were in the audience. I became
an actor, and missed his last
hours upon the stage
that all the world is,
because I had a second audition
for a show,
which must go on.

Here again, a clever Shakespearean conceit is employed to bittersweet effect. The parents’ roles of active mother and passive father; the daughter’s sense of regret at not having “been there” for her father in his final days; the blinding dedication to a career—all end in the sobering realization that life must go on, that selfishness and ambition are necessary tasks.

Weiner’s poetry is deliciously fun; like that of her poetic mentor, William Mathews, it is droll, unaffected, and erudite. Works such as “In the pool of the jury there are many vowels” with its stanzas “’A, I, E’ make Maine’s / accent haven for lobstahs / and home for Estha,” and “Venom drips / through my neighbors’ Virginia / vowels, as they pronounce / the word ‘Jews’” are priceless. “Fedora,” for her deceased father, is touching and tender. After discovering his beloved hat missing:

In her 50th year,
(his age at the birth of this dark little girl),
she lost it.
She searched madly, constantly,
madly, quietly.

“. . . to the sea again” is a lovely treat, a parting bouquet of emotions. And, in “At 5:45 pm in The Conservatory Garden,” where Weiner tells us, “That dark bird, out / of place amongst the lavenders / and roses, takes / off, with me / tempted to follow,” is when I realized I’ll follow the work of this “madly” accomplished poet anywhere.