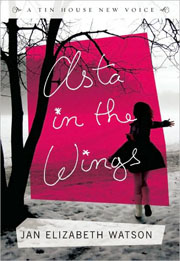 Asta in the Wings, Jan Elizabeth Watson’s debut novel, tells the remarkably imaginative and heartbreaking story of a seven-year-old girl and her first journey into the world outside her mother’s house. Through Asta’s eyes, every square inch of space is detailed and ripe with possibilities, and when the day to leave home arrives, Asta enters each moment with an eagerness to interpret her surroundings, armed only with the finest sense of creativity.

The story takes place in 1978 in a small rural town in Maine. Asta lives with her nine-year-old brother Orion and their mother, Loretta, in a ramshackle house where paint hangs in peels from the walls and tar paper covers the windows. Every morning, Loretta locks the front door from the outside, leaving Asta and Orion to fend for themselves while she cleans houses. Orion can remember when their father was alive and they lived in a house with uncovered windows, but Asta has no memories of her father, and she has never even seen the world outside. The only pictures she has come from the small black and white television set and the books that she reads. Loretta regularly tells her children stories about the bubonic plague—reason enough to stay tightly sealed indoors—and Asta and Orion envision a world in which bodies are piled high along the sides of the roads. “By keeping us at home, [Mother] said, she was giving us a fighting chance.”

Loretta is a theatrical woman who acts out costumed plays with her children, reads Shakespeare out loud from the bathtub, and evokes the metaphor of the stage for practically everything: “Are you listening, Asta? You can conduct yourself as if you are watching a movie—with darkness closing in on all sides—or, choice number two, you can conduct yourself as if you are acting in a movie, with your inner light guiding you all the way.” Loretta’s favorite book is The Big Movie Book, a photo collection of famous silent film actresses. Loretta knows the detailed stories of each extravagant life, and she says to Asta as she flips through the pages: “I could’ve been bigger if I’d wanted to be . . . I must have been too shy, not formidable enough. But, oh, I remember how exciting it was, standing there in the wings, waiting for my turn to go onstage.” Asta, of course, is standing in the wings of her mother’s life—the obvious theme of the novel. One evening, however, Loretta does not come home. Asta and Orion are forced to find a way out of the house. Outside it is winter, and without knowing where to go, they embark on the search to find their mother.

Asta in the Wings is ultimately a story of neglect, and the plot line of a mother’s inability to care for her children is addressed from a unique angle. Asta paints Loretta as a vivid and lively character, building a stage that shows off her mother’s strengths, but even in the child’s glowing reviews, there are signs that something is amiss. In the beginning chapters, much attention is given to the size of Asta’s body:

While being thin did have its inconveniences—it hurt my bottom to sit on unpadded chairs, and I had to sleep with a pillow between my legs because my knees jabbed into each other—these served as daily reminders of our virtuousness and discipline . . . And I must admit to having had a curiosity about all the bones that arose in me, bones most people don’t even know they have, bones cropping up with the immediacy of spring crocuses. Sometimes I was a whole bed of crocuses . . .

This passage has the strong undertones of a malnourished child, but it also shows how even hunger can be viewed as beautiful. Growing up in such a small space with only two people to interact with, Asta develops a keen sensitivity to the smallest wonders. She entertains herself with the barest tools, and her imagination is deeply intertwined with the novel’s poetic language. Through Asta’s seven-year-old eyes, beautiful sense is made of everything—sometimes too much sense, but the premise of the story is strong enough to overlook this flaw. Seeing the world through Asta’s eyes is delight enough in itself.